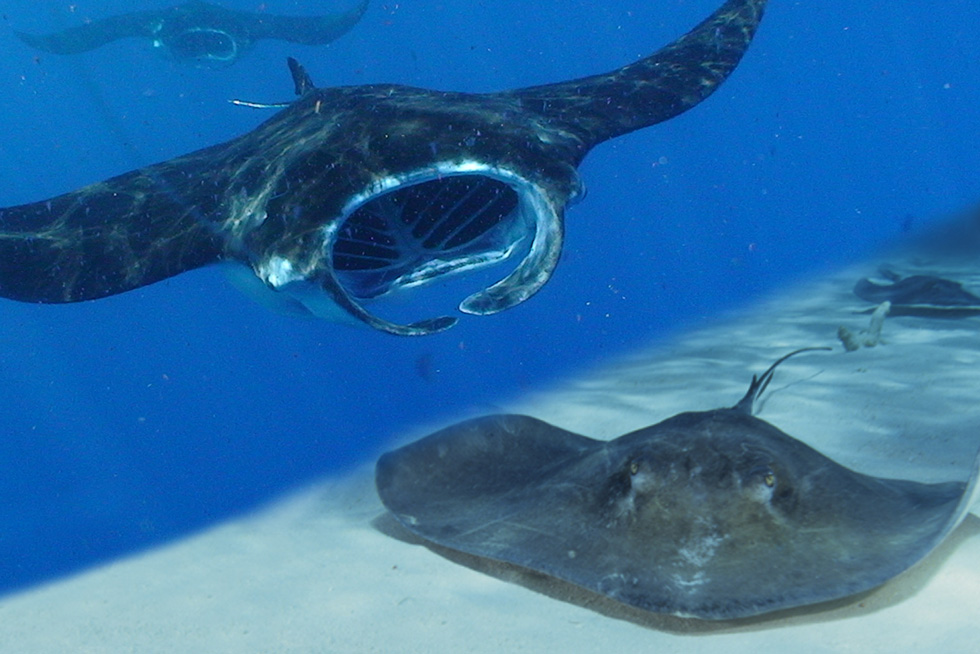 “Isn’t that what killed Steve Irwin?”

Before the manta activity starts, that is one of the most frequently asked questions we get about manta rays vs stingrays.

Steve Irwin died in 2006 after he accidentally got stung directly into the heart by a short-tail stingray.  It was a fatal wound with a dagger-like stinger, and apparently, the death was almost instantaneous.

Steve Irwin was a great and colorful Australian conservationist who died too young.

Let’s dive a little deeper into this topic to clear up any confusion by comparing the beautiful mantas to stingrays based on their species, size, diet and more.

Mantas and stingrays are relatives and belong to the same subclass Elasmobranchii (shark, rays and skates). There are only 2 different species of mantas (alfredi and birostris). In comparison, there are over 100 different stingray species.

Differences based on size

Differences based on diet

The manta’s mouth is in the front of its body and filter-feeds on plankton.

A stingray searches on the bottom for food as its mouth is underneath. Some species generate a suction force that pulls the prey beneath.

Differences based on defense

A manta’s defense mechanism is flight. It does not have teeth, a barb, nor a stinger.

Thanks to the manta’s size and agility combined with acrobatic maneuverability they simply swim away when they feel threatened. They can move very fast and outrun their main predators, which are tiger sharks in Hawaiian waters.

In fact, a few years ago, I sold a manta video to a group of aerospace engineers because they wanted the footage from their dive experience solely to study the manta’s incredible movements.

A stingray has a stinger which is located on its dorsal side by the tail. It only uses it when it feels threatened, which most often occurs when someone has stepped on it.

Differences based on motion

The manta ray is a creature of perpetual motion meaning it never stops swimming. It glides through the ocean its entire lifespan of approximately 40 – 80 years. It will suffocate if no water is pushed over its gills.

Mantas use their wings to keep moving forward like a bird but can easily “turn on a dime”. This makes their movements so graceful.

In comparison, you would think a stingray would swim the same, but it looks more like a wave. Undulating would be another good way to describe how it moves its body.

Stingrays have the ability to lay still while pushing water over their gills and for camouflage they bury under the sand. It’s the best disguise ever!

SEE THE MANTAS WITHOUT WORRY

I hope this straightforward comparison of manta rays vs stingrays has helped your understanding. As you have now discovered, manta rays are truly gentle giants of the ocean!

Rest assured, manta rays are not the creatures that Steve Irwin encountered on his last ocean adventure.

If you have ever dreamed of diving with the manta rays, download today your “15 Essential Tips for an Adventure of a Lifetime”.