Get the Hardcover Book
Get the eBook

Raising Children as Good Stewards of the Oceans

If we want to raise the next generation to be more environmentally conscious than the one before them, we need to start now. Today’s children are the leaders and decision makers of tomorrow: let’s show them what they can do to make the world a better place.

Notch is a playful dolphin, who gets entangled in a carelessly discarded fishing line.

He embarks on an adventure to look for help, encountering other marine animals on his emotional journey and learning that still sometimes, just sometimes, humans will be there to help.

This story is based on real events – the rescue of Notch, a bottlenose dolphin who asked a diving team for help off the shore of Kona (Hawaii) in 2013.

Read more about his rescue

What’s so special about this children’s book?

The 54-page long story empowers children around the world to learn more about nature, oceans and the environment.

The story is easy to follow for children between 5 and 12 years old; and thanks to the beautiful images by Jackie Mask, it will delight younger listeners as well.

This story helps you teach children about marine life from a young age. It features real-life animals living along the Kona coast of Hawaii!

Buy the eBook on Amazon
Buy the Hardcover

“As a teacher, my greatest joy is teaching my own children. They both love the ocean and learning about new animals… The story of Notch gives them more of both and is a welcome addition to their library.”       ~ Mark G.

The Real Story of Notch the Dolphin

In January 2013, a wild dolphin approached a local dive team that was swimming with manta rays off the Kona coastline. The dolphin appeared injured: a hook lodged in his pectoral fin had wrapped his head in fishing line, severely restricting his ability to swim freely.

The dolphin paused near a divemaster, who compassionately worked to remove the hook and line- saving Notch’s life. Martina Wing captured the entire encounter on video. The footage went viral on YouTube and Facebook and was featured at several film festivals and in international productions.

In 2017, Martina turned the amazing encounter into a children’s book: the story of Notch the dolphin, who gets entangled in fishing net and his captivating search for help… encountering several other marine animals on his journey (before getting rescued by divers, just like in real life).

Read the Full Story of Notch, the Rescued Dolphin 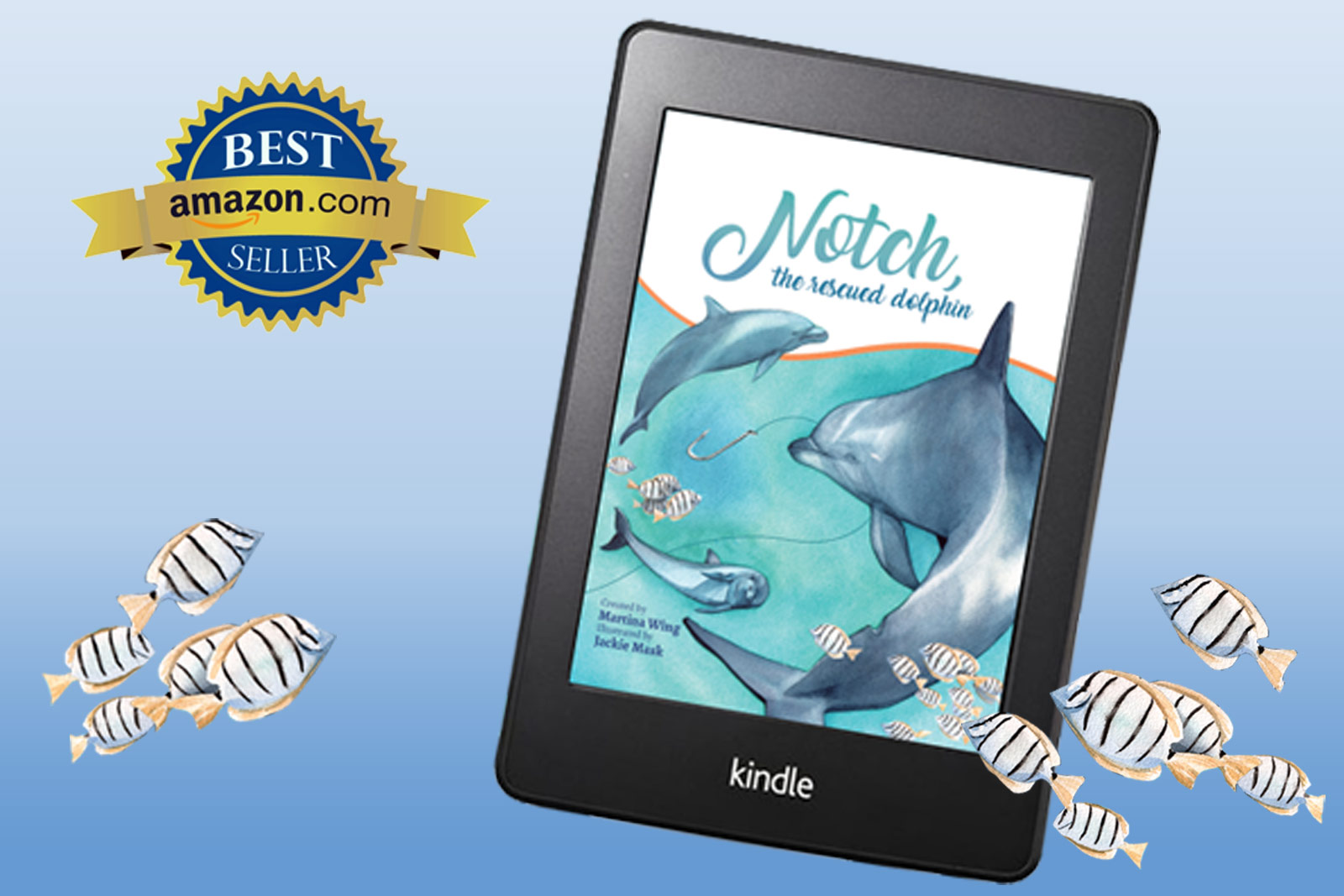 Get the Kindle Ebook 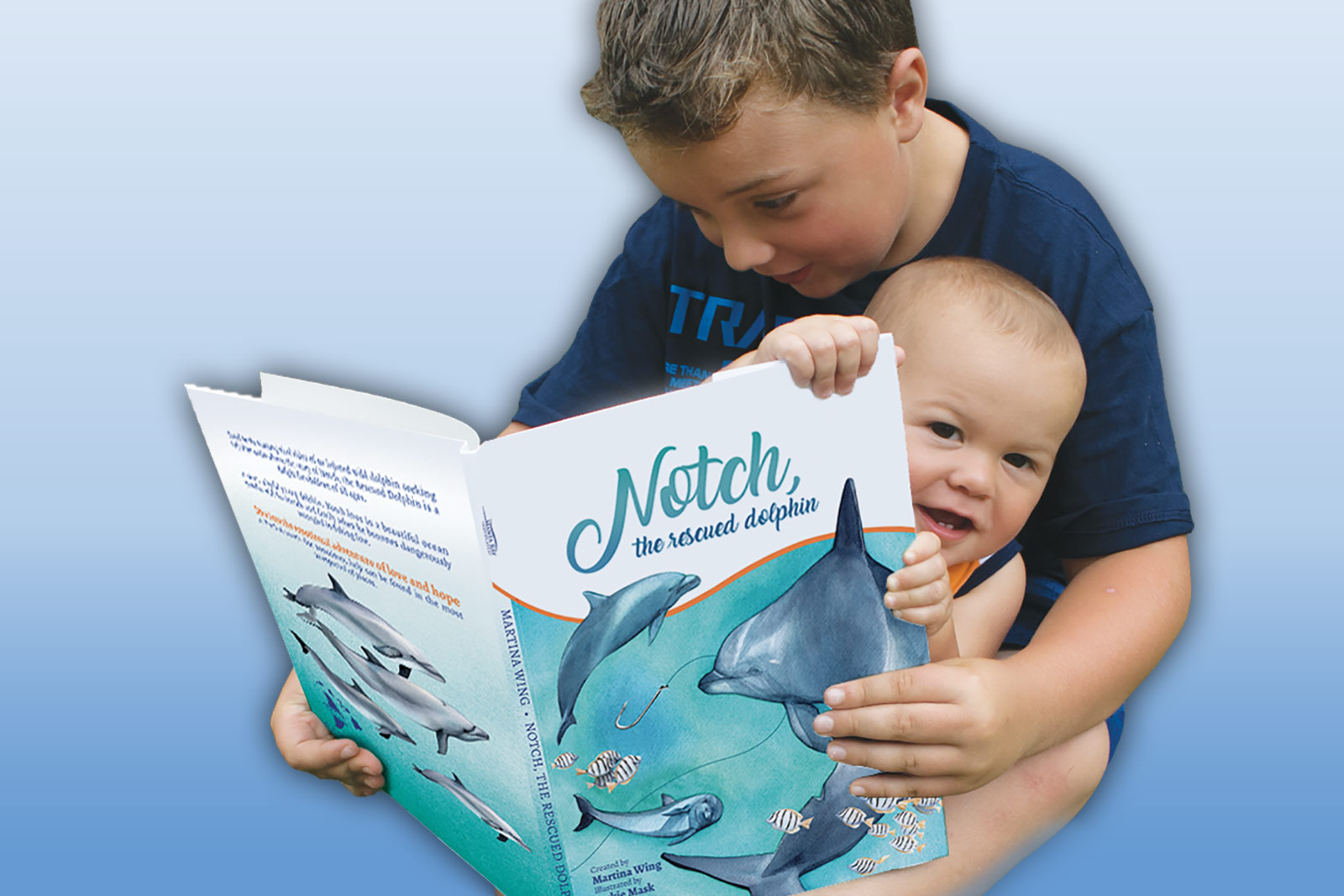 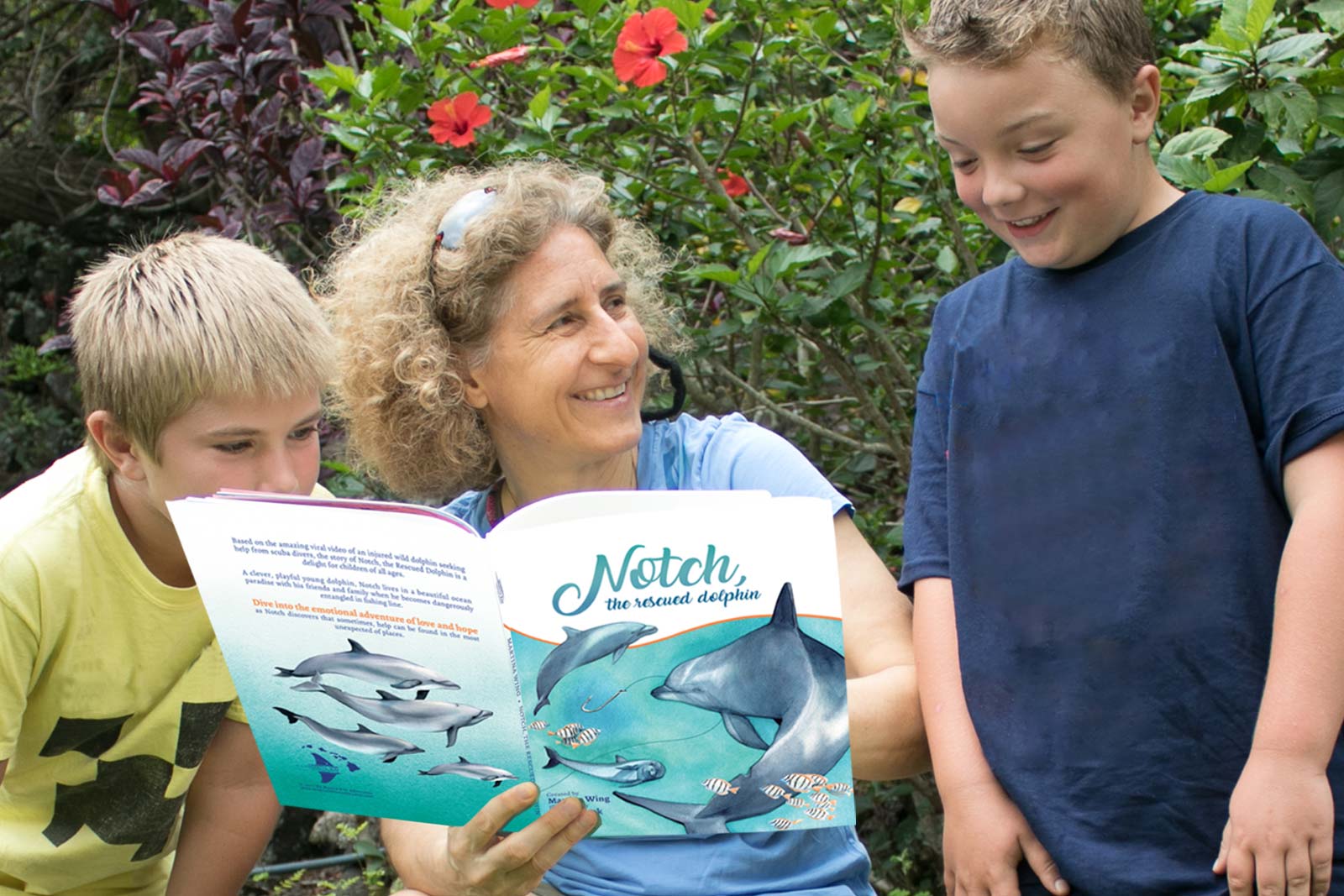 Notch in your Classroom

Want the author to visit your school (live or virtual)? Or get your hands on teaching material to help you educate about marine life and ocean conservation?

Get in touch w/ the author

What They Are Saying 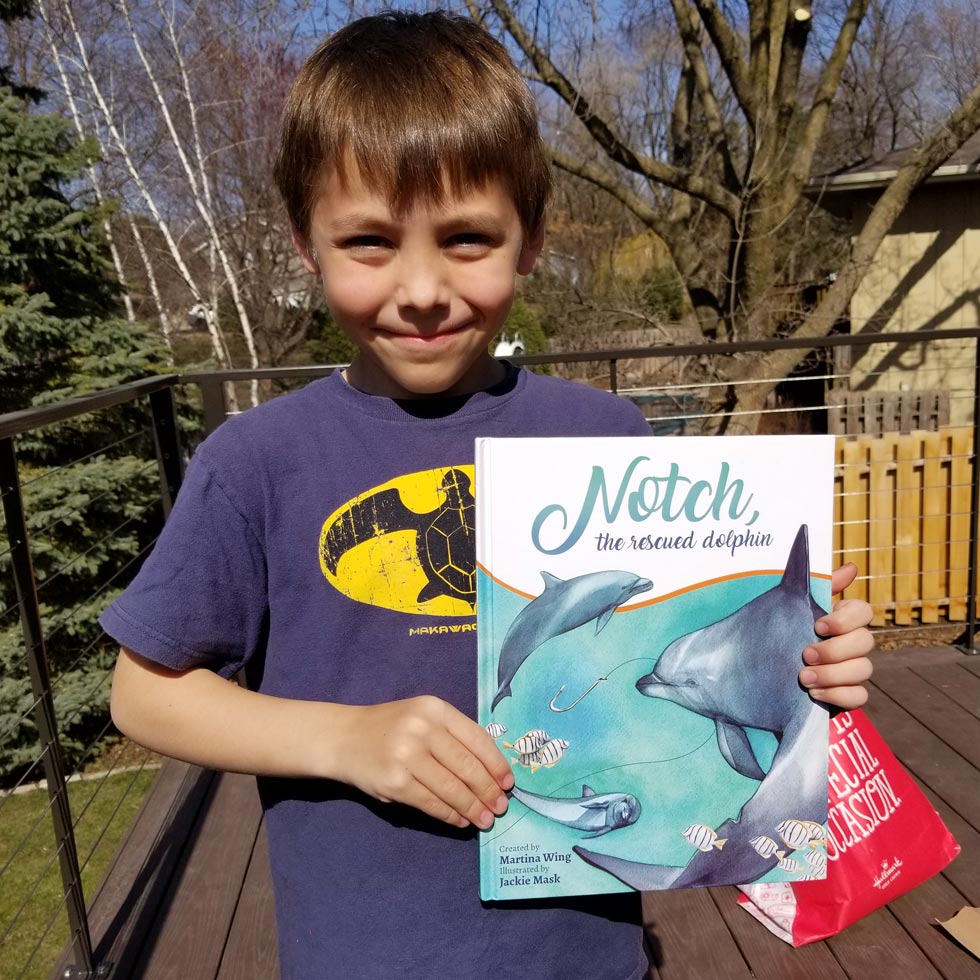 What I love about this book is it’s simplicity in bringing light to really important topics around marine life and the ocean. I have had the privilege see Martina & Manta Ray Advocates work first hand and It’s so powerful to see the message of marine life awareness being spread in such a fun light-hearted way. Great for kids and adults alike! 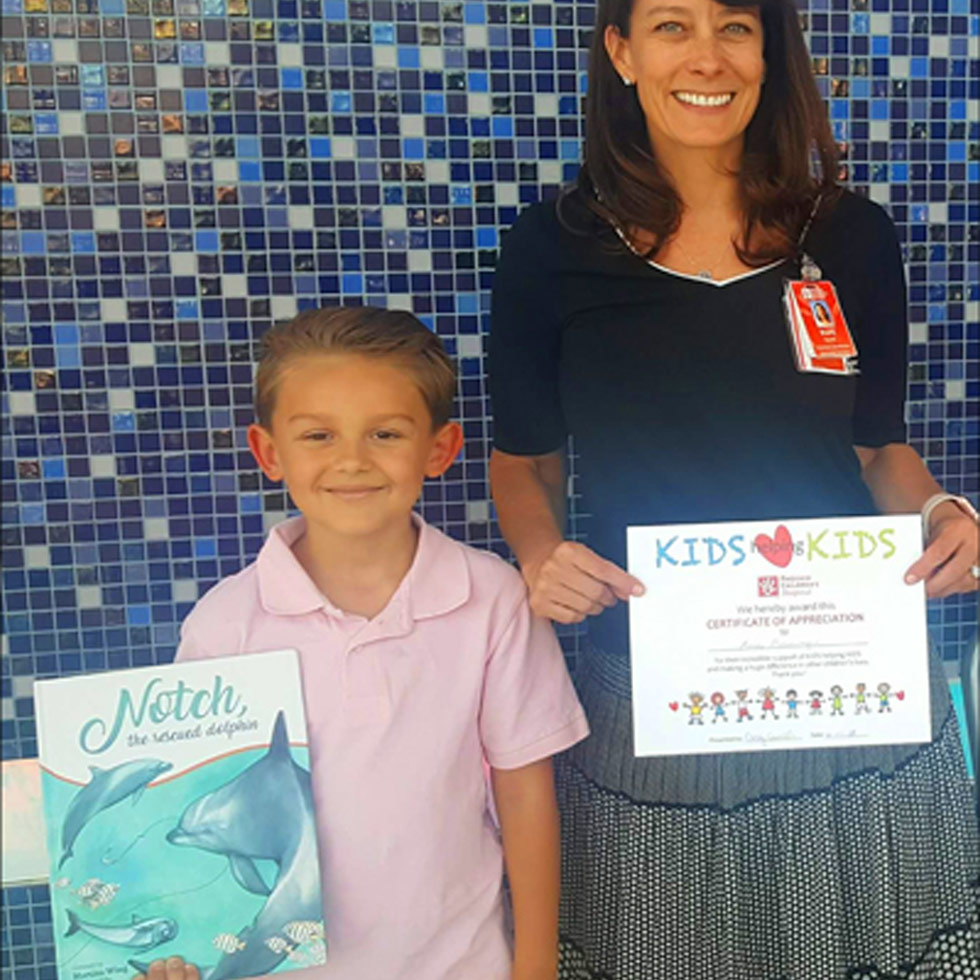 This is such a wonderful story of Notch. It really inspires you to help others in the world through compassion. Thanks so much for sharing this story with everyone! 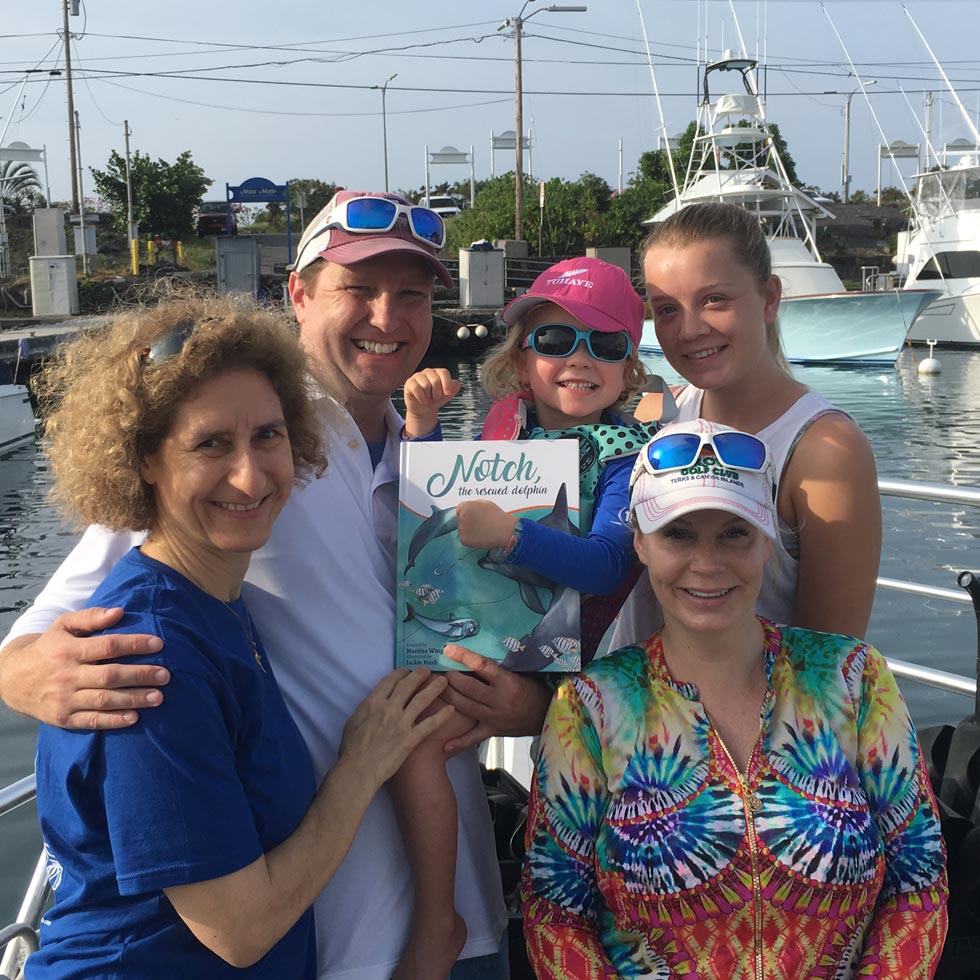 I spent time in Hawaii and reading about Notch and his other marine-life companions helped me return to Hawaii in my mind. The story gently educates and is close to real life. You can see the love for the animals and the ocean in the storyline and in the enchanting aquarelle illustrations. So glad that it is now available on Kindle as well. 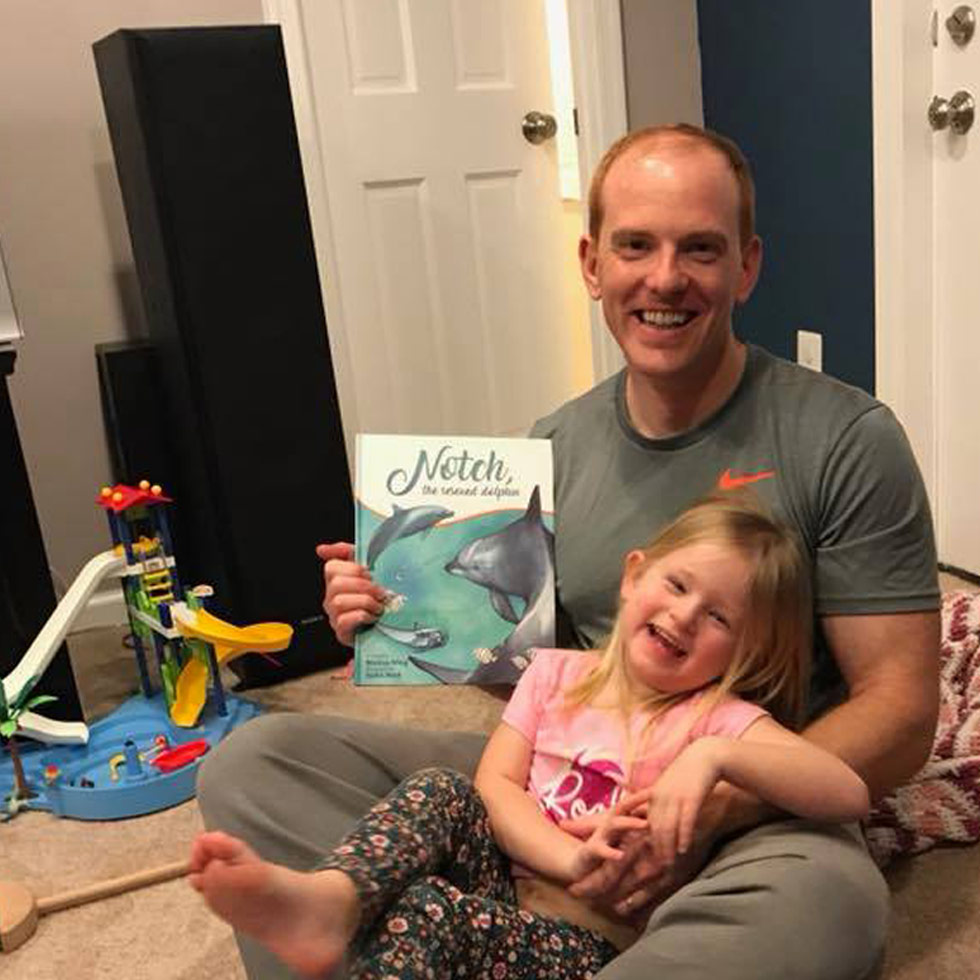 This is a wonderful true story. My grandkids loved it! … it’s such a heart-warming tale of a wild dolphin seeming to “ask” for help, and understanding that the diver coming at him with a knife was only helping!
It’s just amazing and backed up with a video on YouTube which is really fun to see as well. 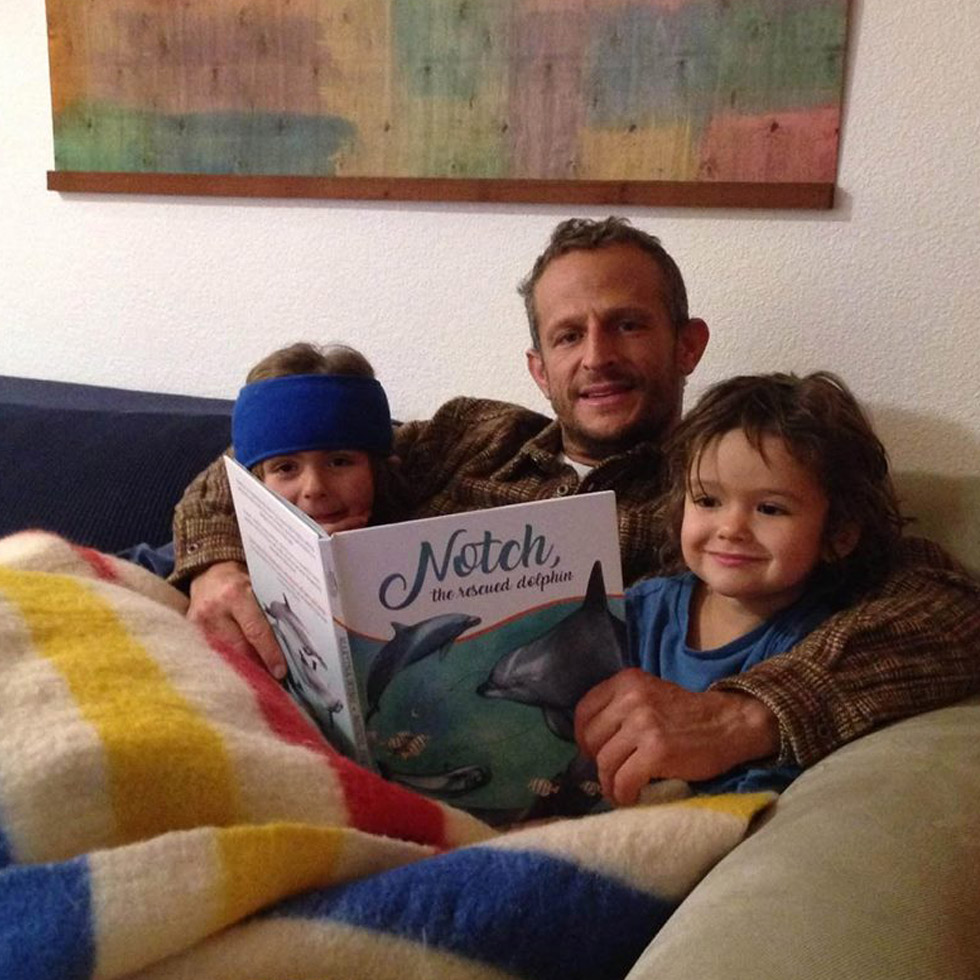 Good children story about the natural interactions of animals in their environment and what happens when humans unthinkingly disrupt the order. Raises the question of animal intelligence and humane treatment of animals. 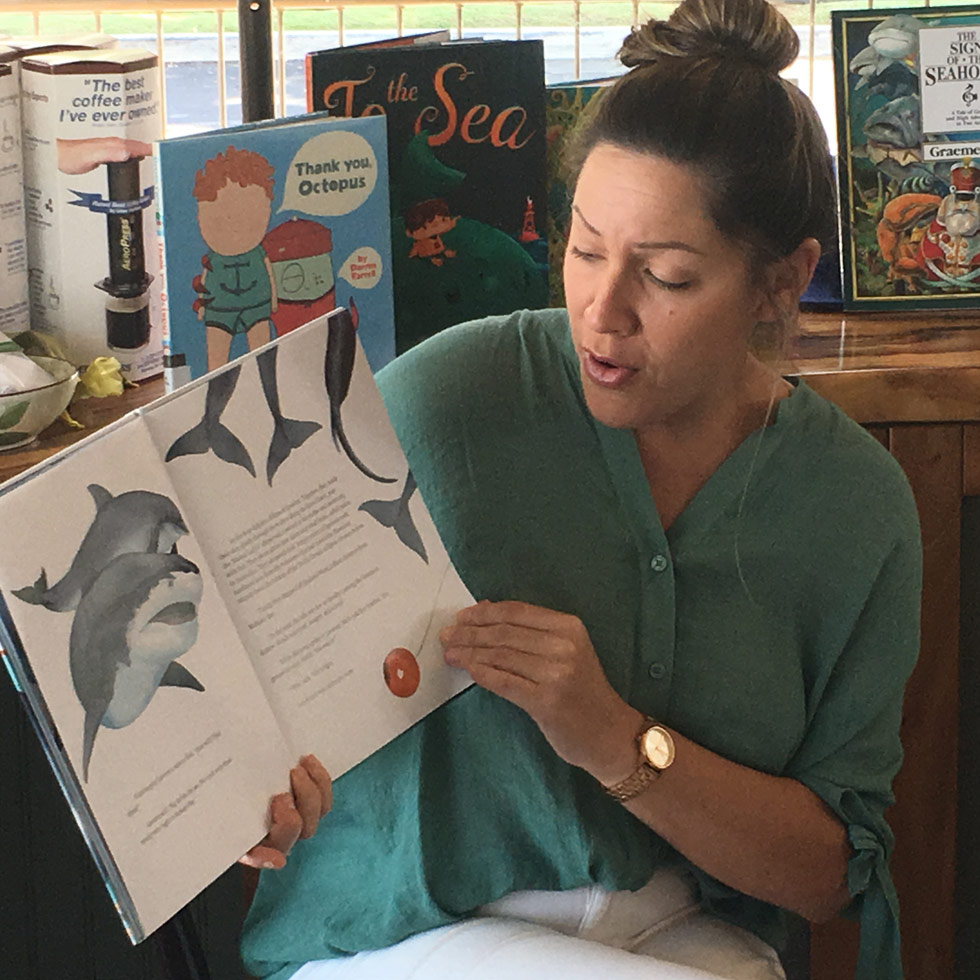 This book is awesome! Not only is it an easy read for children, but it is based on a true event. I have given this book as a gift to many of the kids in my family. It tells a story written with Aloha and also about the importance of the much-needed balance between humankind and the ocean animal kind. 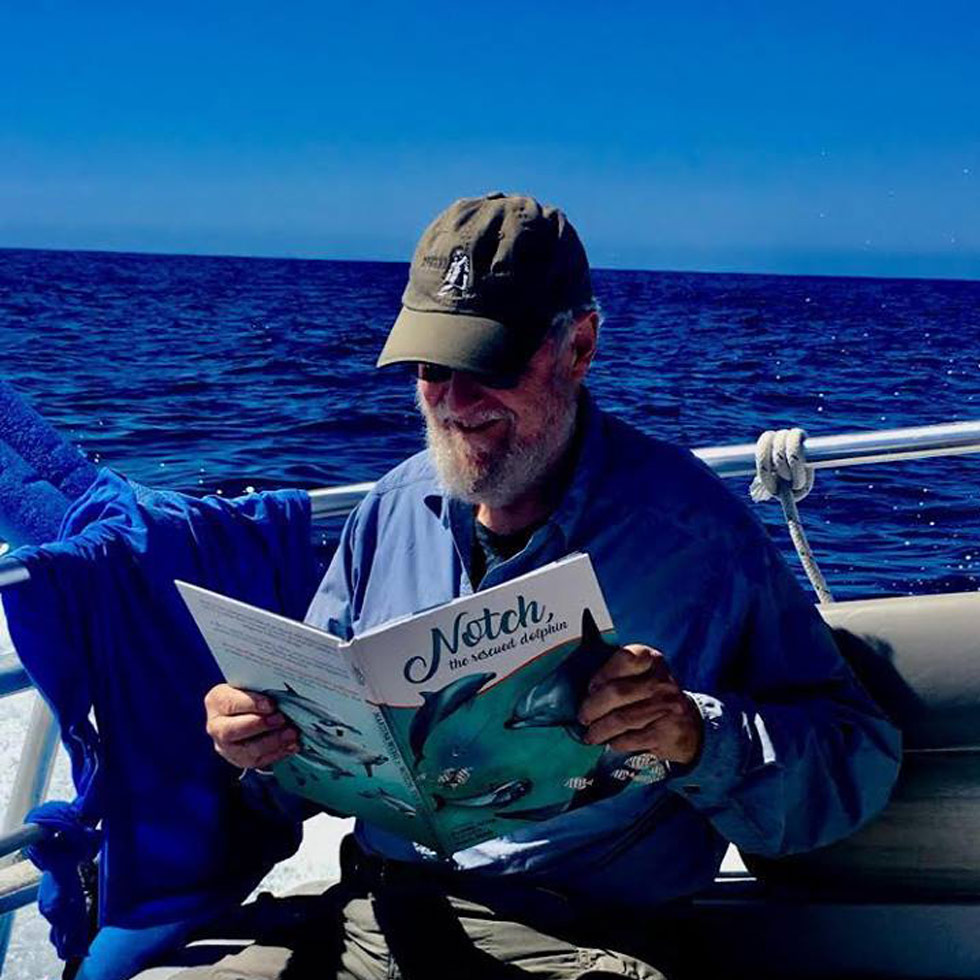 I bought 3 copies of Notch, the Rescued Dolphin, after following Martina Wing, the author, on her blog about the Manta Ray dives she leads off the coast of the Big Island. The copies went to my grandchildren for Christmas. It’s a beautifully illustrated book with a heartwarming story showing the trust and respect ocean animals share with humans. Both children and their parents enjoyed reading the book. 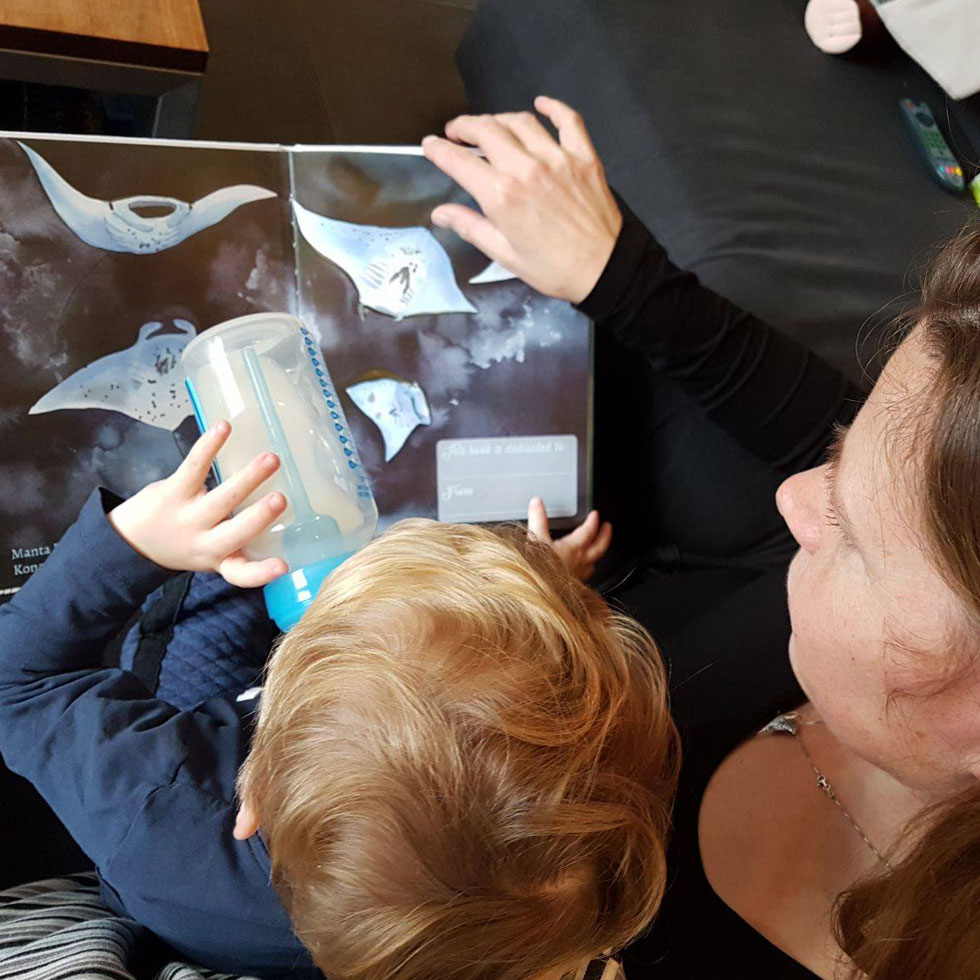 I purchased this book from Martina after a wonderful experience on one of her nighttime snorkel adventures with manta rays. The book was intended for my little nephew ~ but, of course, I had to preview it first. It’s a great tale for kids of all ages with some serious messages about kindness and the connection that exists between humans and animals. And, what makes it even better is that thiscteally happened! Highly recommended! 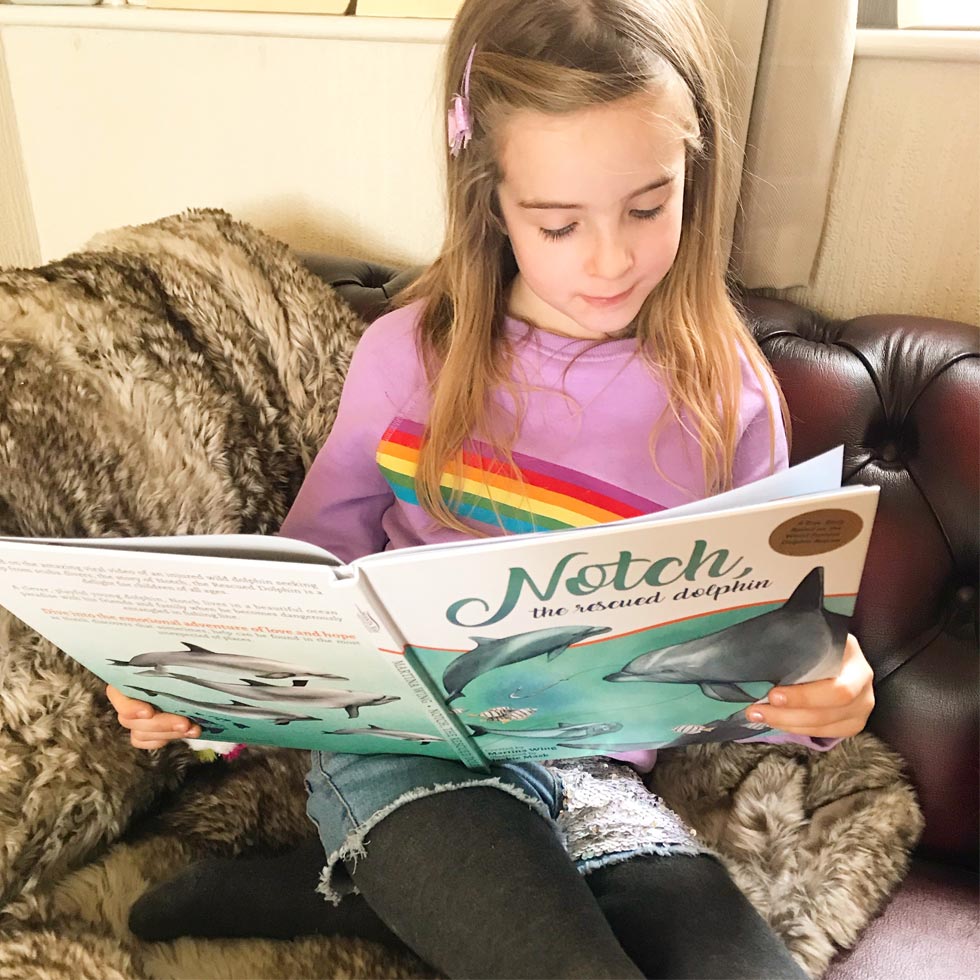 This is one of those children’s books that pack a lot of information inside their covers. The text and charming illustrations deftly relate a potentially harrowing story about a sympathetic animal character (Notch) and bring to light an important ocean pollution issue. The author vividly evokes the ocean environment of Hawaii. It includes a link to the video of that rare encounter. Highly recommended. 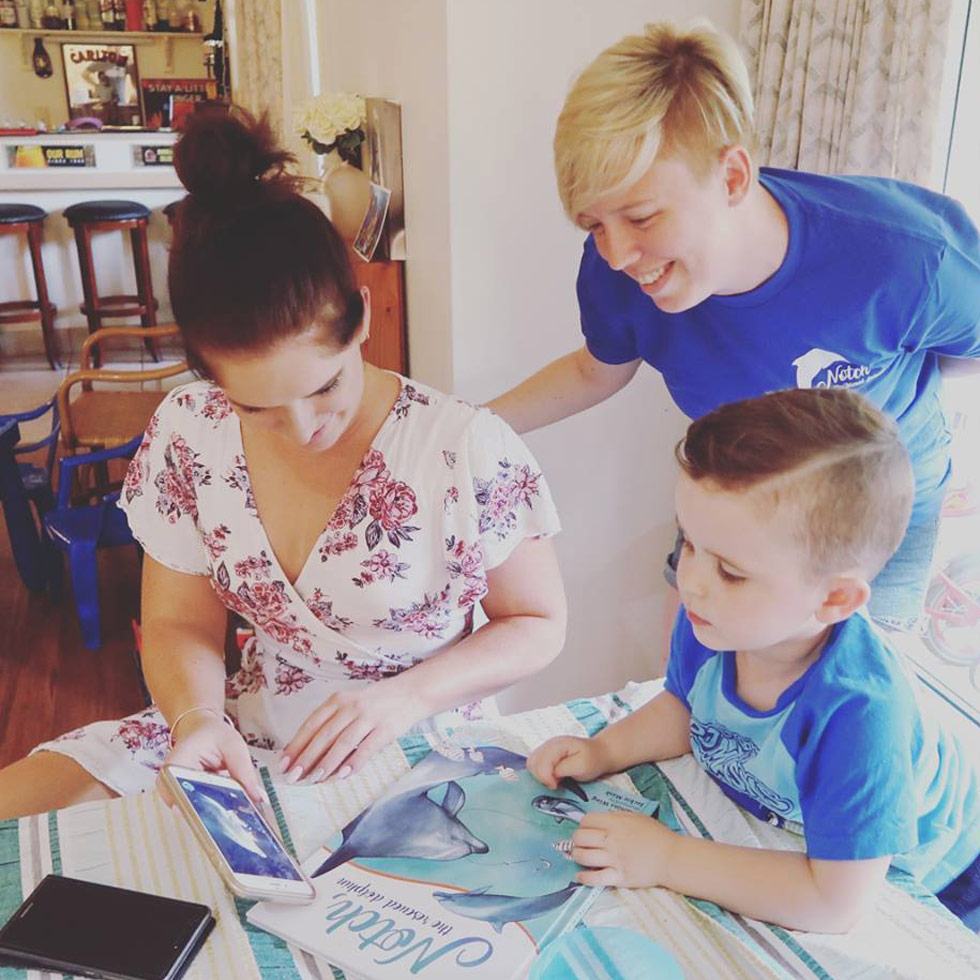 I bought this book in Hawaii to share with my grandchildren and they loved it! I wish you could have seen their faces as they learned about this true rescue. I used the color sheets from the website so the class could share the story with their families. We also watched the online video of the actual rescue so it was a wonderful way to show the connection between humans and dolphins. 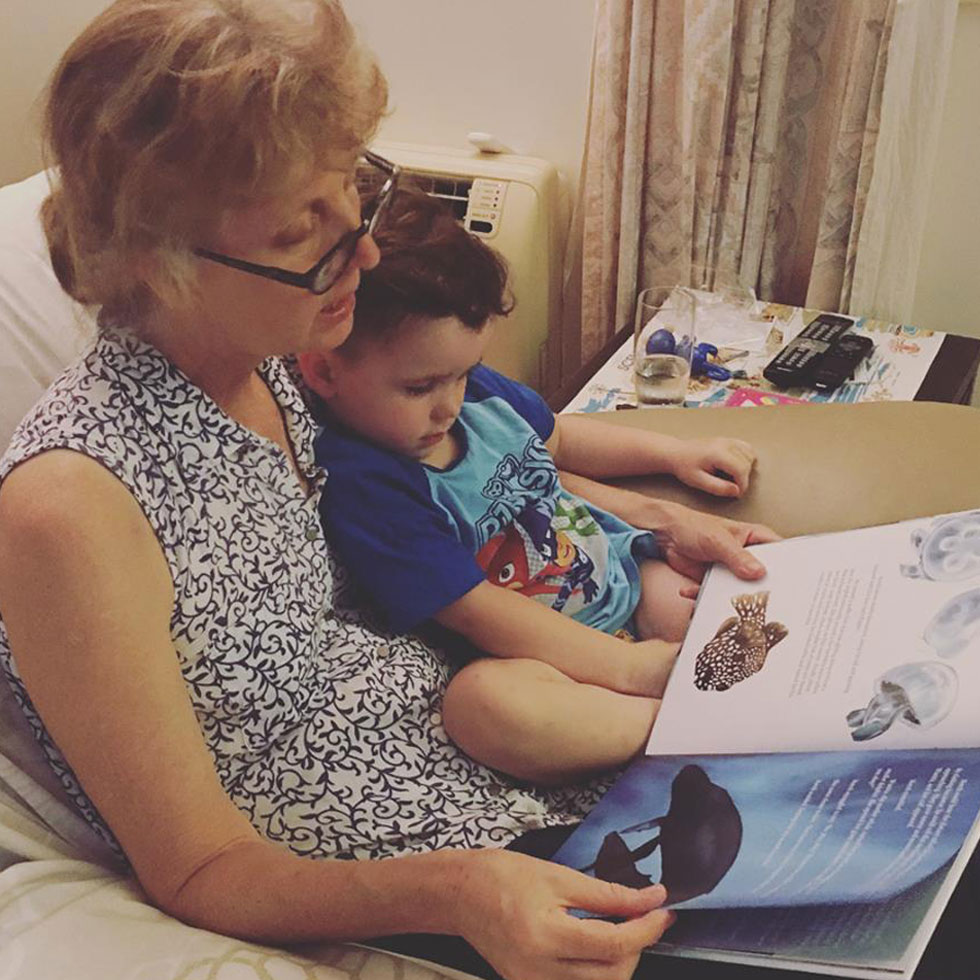 I loved this book. As a scuba diver who has been around dolphins on many occasions, it is wonderful to read about humans helping these magnificent animals in times of need. Notch is a heartwarming must-read for kids of all ages. 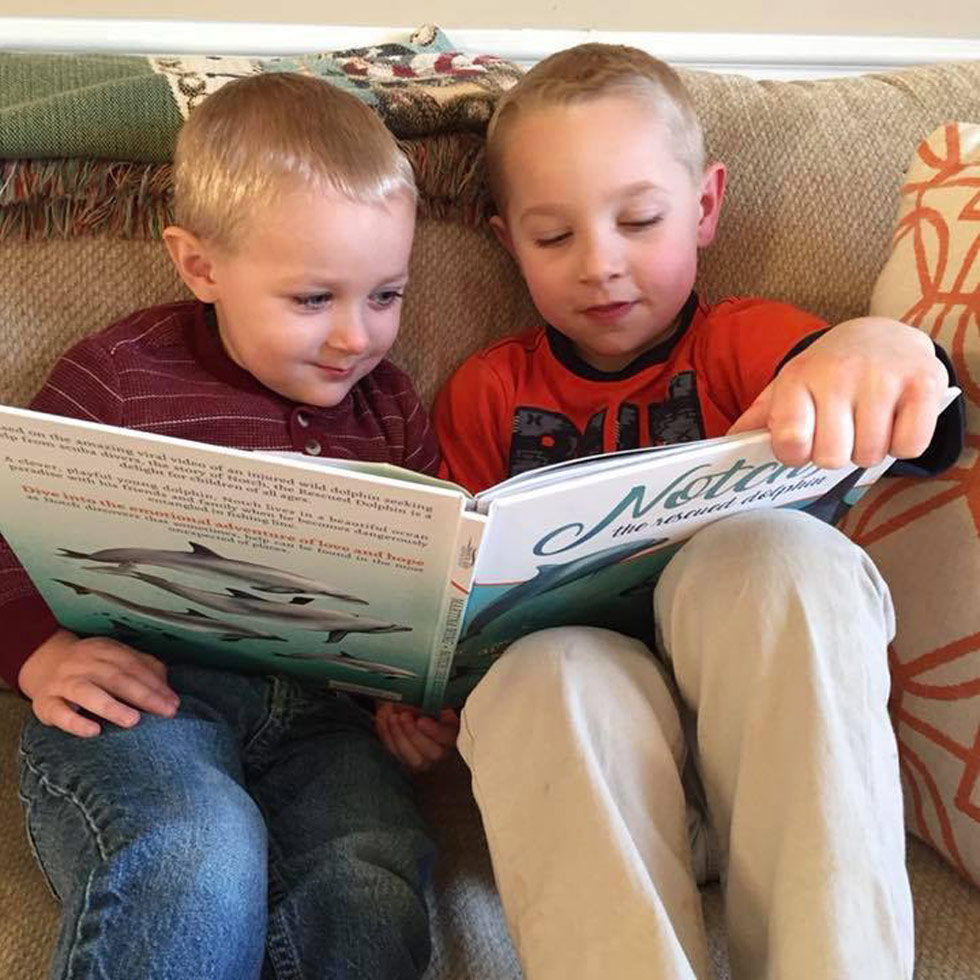 This is a sweet book for children or adults with beautiful illustrations. A must-read and true story for animal lovers everywhere. 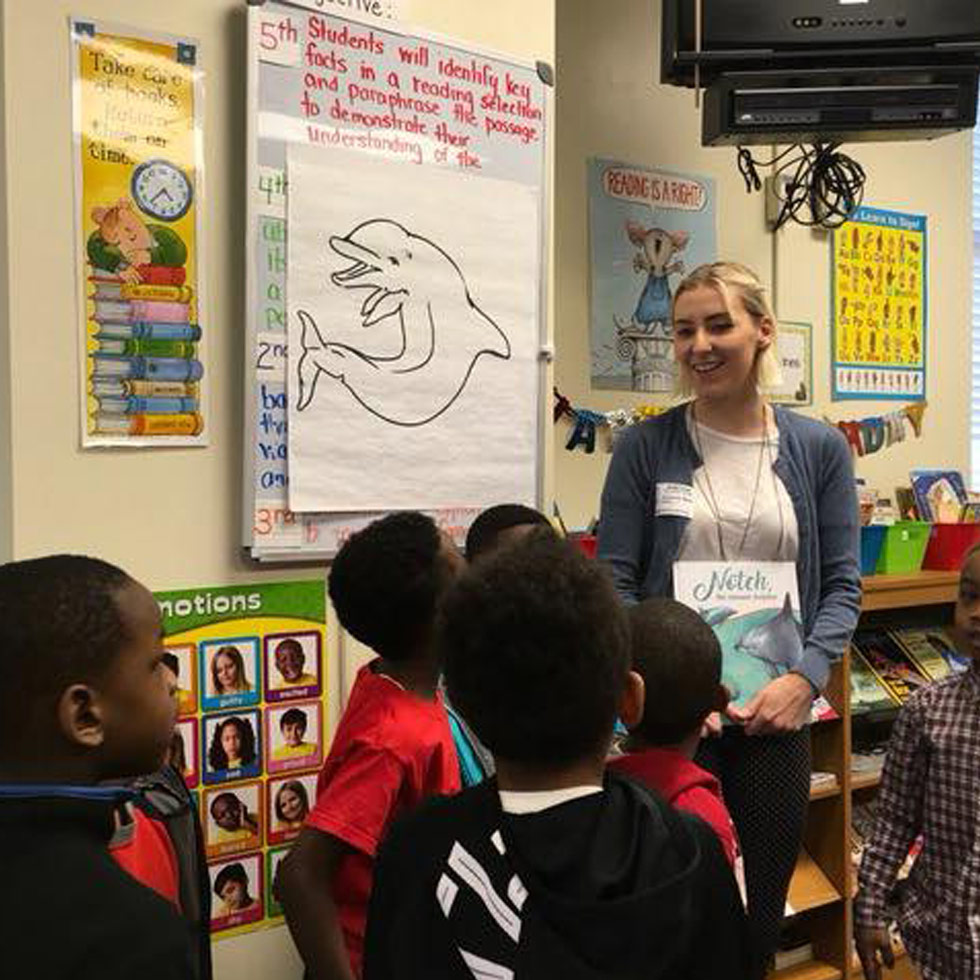 I love this book! Though it gives the appearance of a children’s book, don’t be fooled. This loving tale of community, trust, and environmental awareness captivates readers of all ages. Notch is the perfect gift for children, teenagers, and teachers. 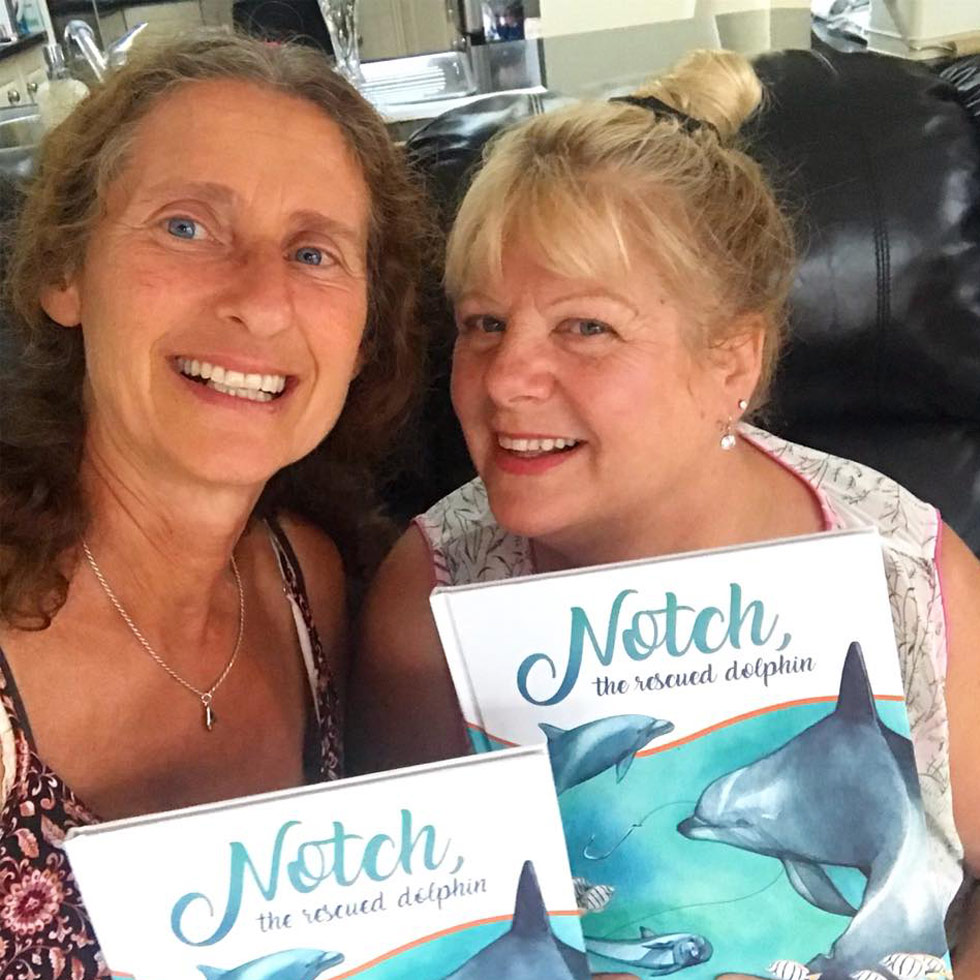 Powerful message and beautiful illustrations. I was really blown away to see the dolphin “asking” the divers for help. Be sure to follow the links to the actual rescue video. Definitely worth watching.

GET YOUR COPY HERE

The Kindle version is available on Amazon and the hardcover by mail order form or at retail stores in Kona on the Big Island of Hawaii. 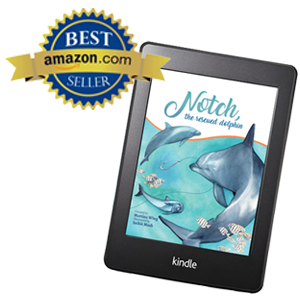 Get the eBook on Amazon 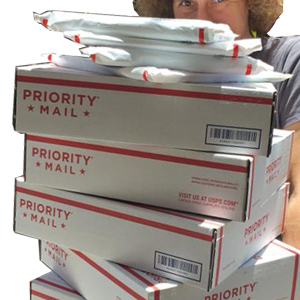 We ship to all 50 US States 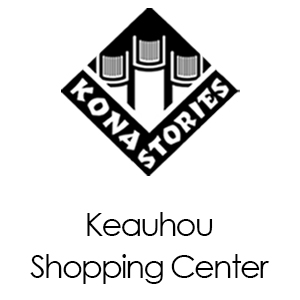 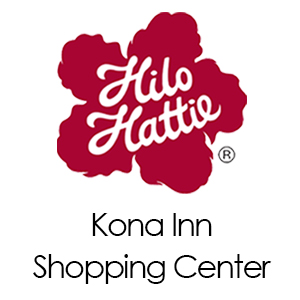 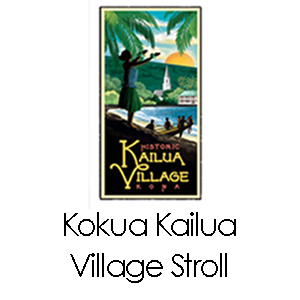