Everything you Ever Wanted to Know about Manta Rays 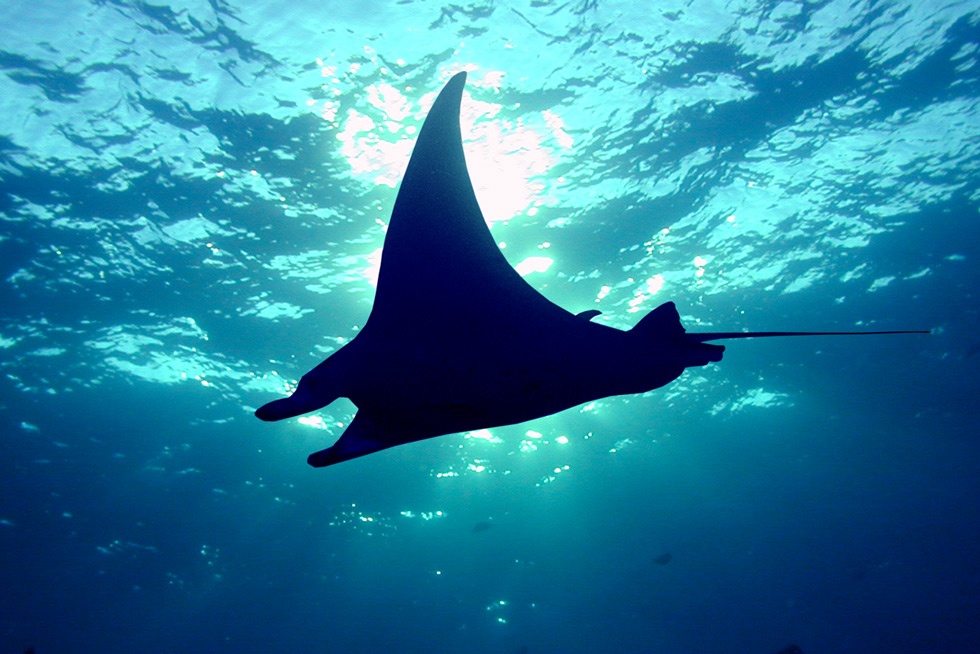 Manta rays are the world’s largest rays – and still a mysterious creature, as not much is known about them. Mantas are slow and gracious animals, and we also call them the “gentle giants of the sea”. They live in temperate, subtropical, and tropical waters.

In the family of rays, manta rays are the largest ones. Another common name for the manta ray is “devil ray” because their cephalic horns give them something of a devilish appearance.

There are two types of mantas: reef mantas (mobula alfredi) and pelagic manta rays (mobula birostris). The latter is also called “giant manta ray” or “oceanic manta ray”. Oceanic mantas are larger and migratory – whereas reef mantas are smaller (but still huge!) and they live in shallow coastal habitats. You can read about the differences (and similarities) between the two in this article.

Manta rays are cartilaginous fish in the subclass Elasmobranchii and as such, they are relatives of the shark.

Other Rays (Not To Confuse Them With)

They also have the largest brain-to-body ratio in the family of sharks, rays, and skates.

Are Manta Rays Fish or Mammals?

For the longest time, the world thought that manta rays were cetaceans – marine mammals.

However, manta rays are definitely fish and not mammals.

Mantas do have some characteristics of marine mammals though; they have the largest brain-to-body ratio of all fish, and they are fairly more advanced at problem-solving and communicating than your average fish.

They’re often playful and curious, and some studies (where manta rays would recognize themselves in the mirror) have even attributed some level of self-awareness to the gentle giants.

How Big Do Mantas Get?

In Hawaiian waters, we encounter manta ray “pups” with a wingspan of 2-3 feet and reef manta adults up to 12-14 feet. Mature males are up to 10 feet; the females tend to be the larger ones.

Giant oceanic manta rays can have a wingspan of up to 22 feet wide. A picture of unknown origin shows a manta ray in New Jersey in 1920 which measured approximately 30 feet.

How Much does a Manta Ray Weigh?

This is one of the most frequently asked questions – and we can only estimate the answer. Depending on the gender and the type (giant manta or reef manta), most of them would weigh between 50 and 100 lbs (between 22.5 and 50 kilos) per foot of manta ray. 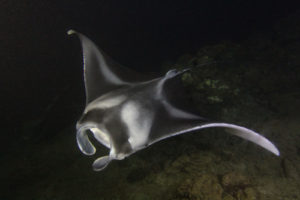 How Many Manta Rays are Left in the World?

To be honest: no one really knows how many manta rays are left in the world. The database of mantas around the Big Island of Hawaii contains about 320 individual manta rays; however, this catalog was started in the early 90s, and there’s no way to know how many of these are still alive.

The Manta Trust recently identified the 5000th manta in the Maldives since they started keeping a database. But again, it’s hard to know if they’re all still alive to this day.

There are two types of manta rays, and each appears separately in lists of endangered or threatened species. As of December 2020, the giant (oceanic) manta is classified as “endangered” on the IUCN Red List, while the reef manta is labeled “vulnerable with decreasing numbers”.

Where do Manta Rays Live? What are their Natural Habitat and Migration Patterns?

Manta rays seem to be solitary creatures, coming together only to feed and mate.

Reef mantas do frequent the reef for the purpose of being “cleaned” by small fish that live on the coral reef. The areas where they hang out are called cleaning stations and serve the manta ray as a sort of “day spa”.

Reef mantas mostly live along the coastlines in the Indo-Pacific zone, while the giant manta roams all the world’s major oceans.

According to scientific studies, manta rays from different oceans have the same mitochondrial DNA.

We don’t have much (if any) official data on migrations or swimming ranges of any type of manta ray.

How far do mantas swim?

Until recently, we believed the reef mantas’ home range would be approximately 90 square miles (145 km²), which is roughly 30 miles up and down the coast and 3 miles offshore. The “Kona family” we know well (reef mantas who live around Kona, on the Big Island of Hawaii) is most frequently observed at 3 different manta ray viewing sites around Kona.

However, we recently spotted Loulou Ray in two different locations around the Big Island, located 55 miles from each other. We don’t know yet if Loulou is an outlier, or if mantas actually swim further than we thought they did!

How Long do Manta Rays Live? 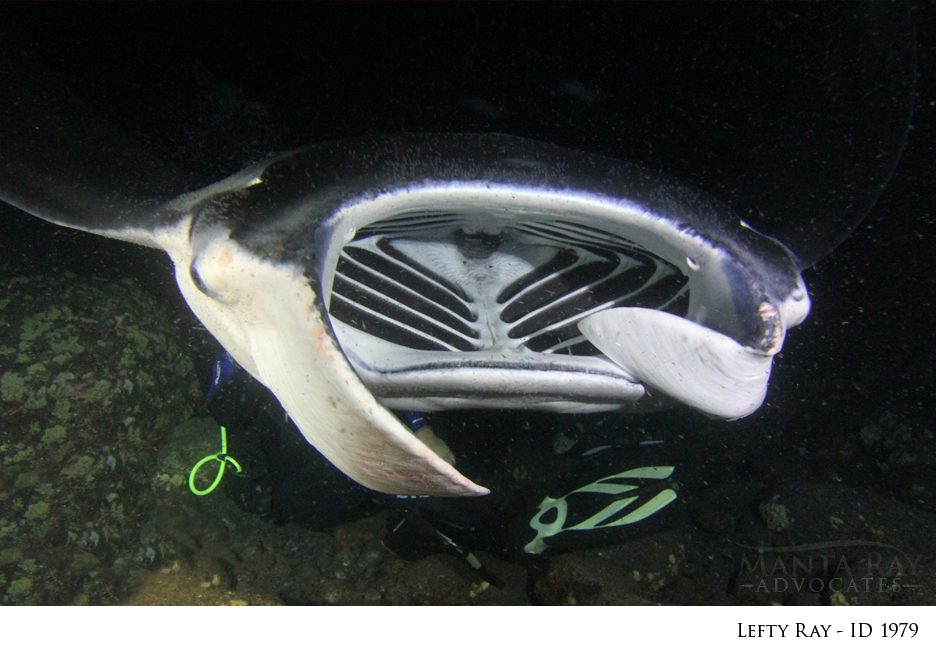 What do Manta Rays Eat?

Mantas filter-feed on plankton. Their diet consists of copepods, mysid shrimp, crab larvae, mollusk larvae, and fish eggs. A manta ray will eat approximately 12% of its body weight in plankton per week.

Mantas filter the plankton out of the water using a complex system of traps, filters, cephalic fins, and gill rackers.

They swim slowly and twirl gracefully when they eat; their large mouths open and their cephalic horns unroll to funnel the plankton into their oral cavity.

Read more about their diet and eating habits here! 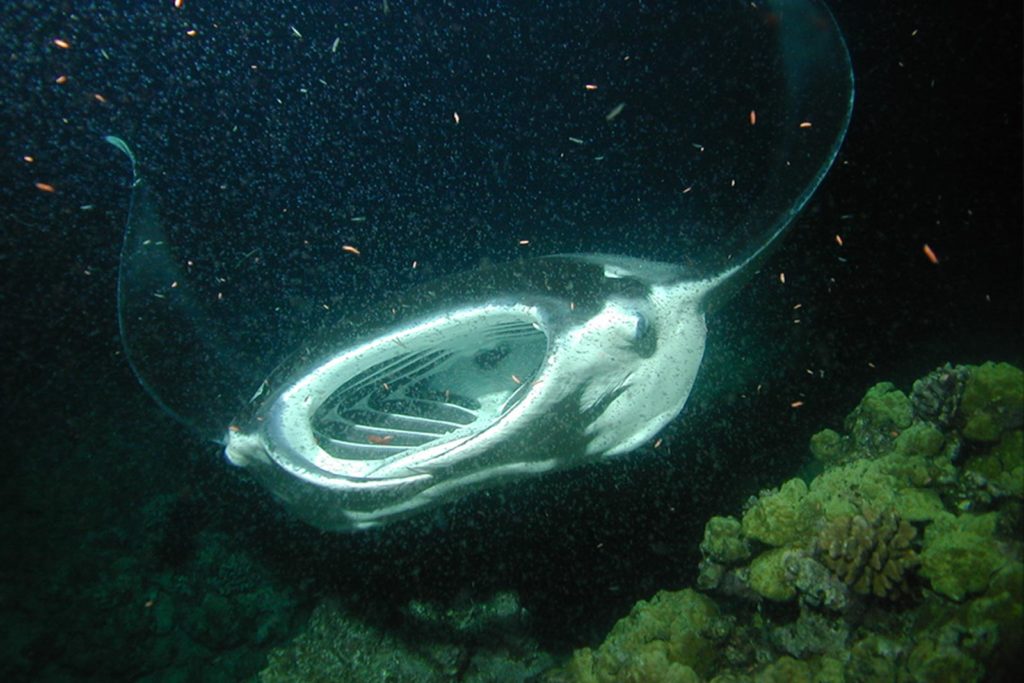 Occasionally we will observe a manta ray jumping out of the water and then falling down on the surface, making a loud noise. This is called “breaching” – and a breaching manta ray is a mighty sight. It sometimes even seems like they’re flying.

No one knows for sure why manta rays breach or what purpose it serves. They might jump up to elude predators, remove remoras or other parasites, or even communicate with others.

Manta rays are generally thought of as harmless creatures. They do not have barbs, a venomous stinger, or teeth. Thanks to their large pectoral fins, they are capable of bursts of high speed, which they use to escape predators. Their defense mechanism is simply “flight”; their maneuverability and speed make them hard to prey on.

Even though manta rays aren’t aggressive towards humans or dangerous on purpose, it’s important not to startle them. The manta could speed-swim into a diver, snorkeler, or a coral head, which might result in an injury on either side.

Manta rays are “ovoviviparous”, meaning the young hatch from an egg inside the mother and the mother gives birth to a live well-developed pup. The young are almost exact replicas of the adult form; just smaller. The gestation period is 13 months, and a manta mom produces only one pup at a time.

At birth, the pups appear cigar-shaped with the two pectoral fins rolled around them like a burrito. Reef mantas are about 2 to 3 feet across shortly after birth; pelagic manta pups measure up to 6 feet.

An adult manta female doesn’t care for their pup after birth as they are not paternal animals. This means that after birth, the pups are on their own.

It is believed that both males and females reach sexual maturity at around ten to fifteen years old.

We don’t know as much as we’d like about the lifecycle of manta rays – we’re still discovering new things about them every year.

Read how manta rays reproduce (from courtship over giving birth to raising their pups) in this article.

Where to See Manta Rays in Hawaii

The Kona Coast on the Big Island of Hawaii is home to three viewing sites where mantas come to feed at night, with a 60-80% sighting chance on a night dive at those sites.

In Maui (another Hawaiian island), Olowalu Reef has a solid population of mantas, but it is not as accessible and frequently visited with boats as the Kona coast. There is a “cleaning station” that they frequent during the daytime, but there’s no guarantee to see them.

As manta rays can’t stop swimming (and they’re giant animals in themselves), they require huge tanks. Because of this logistical hurdle, there are only four places in the world that are adequate to keep mantas in captivity: the Atlantis Resort in the Bahamas, the Okinawa Churaumi Aquarium in Japan, the S.E.A Aquarium in Singapore, and the Georgia Aquarium in Atlanta, GA.

The most challenging aspect is feeding: as mantas would continuously swim and twirl as they eat, it’s hard to replicate those circumstances in an aquarium.

So far, there have been no studies to determine if manta rays in captivity suffer any health or other issues due to their confinement.

The Atlantis Resort has been successful in releasing manta rays back into the wild; watch the video (and read more about mantas in aquariums) on this page.

Other Places to See Manta Rays Around the World

As you can see, manta rays are located all over the world – and every place is unique and offers a slightly different experience.

We love that here in Hawaii the mantas come and feed at set locations (the three viewpoints) so we don’t have to go look for them – but if you’re more of a gambler, it’s also fun to go out on an adventure and hope to spot a manta at a cleaning station. 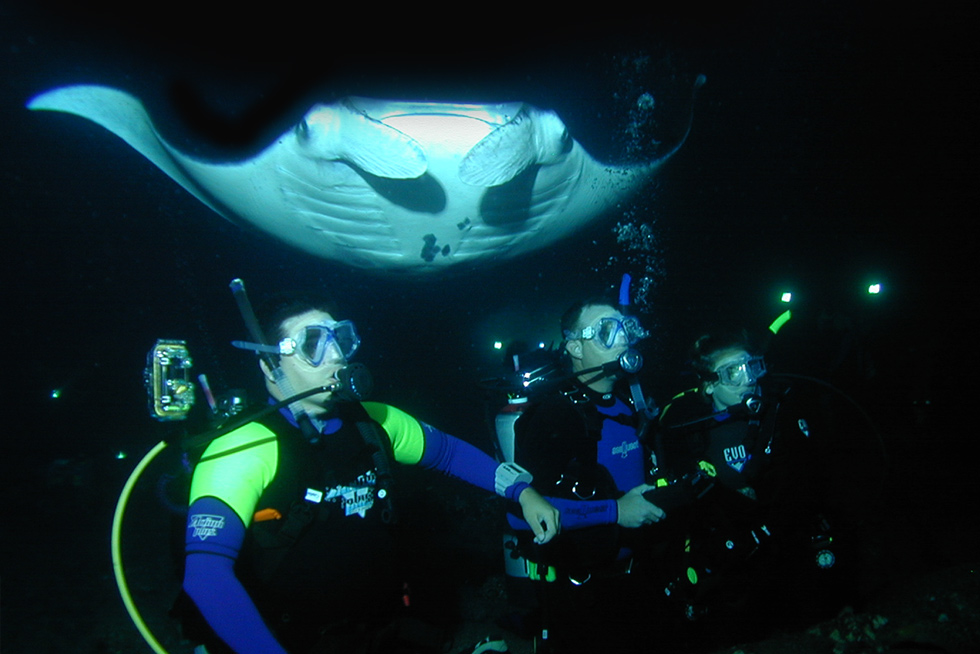 Manta ray colors are primarily gray and black on the top (dorsal side) and mostly white on their bottom (ventral side) with patches of black pigmentation. The patches or black spot patterns, as well as unique physical characteristics, are used to identify individual manta rays.

There has been one sighting of a pink manta ray in Australia and a cool video on Youtube of a white manta ray (who has also been dubbed “albino manta ray” online).

How Fast can Manta Rays Swim?

In normal times, manta rays would swim at a speed of around 9 miles per hour (around 14.5 km/h). However, they’re capable of short speed bursts to escape from danger – where they reach a speed of up to 22 miles per hour (35 km/h).

In combination with their extreme maneuverability (and their ability to jump out of the water, as described above), it’s enough to escape most predators!

Where are Manta Rays in the Food Chain? What Eats Mantas?

Due to their size, manta rays don’t have many predators – even though they only eat plankton, they’re still quite high up in the food chain.

The only sizeable predator capable of taking on a manta ray is a shark. In Hawaii, those would be tiger sharks. However, sharks mainly work as the clean-up crew of the ocean; they only take the old, the sick, and the injured. Young and healthy manta rays are usually safe from predators.

How Deep can a Manta Dive?

Based on current scientific observation, we know that coastal manta rays can go deeper than 700 feet (214 m) for short periods of time, but they spend most of their time in shallower waters.

Scuba divers and snorkelers usually encounter reef manta rays from the surface to 80 feet of depth. During our moonlight swims with them, we dive to approximately 30-35 feet; sometimes deeper or shallower, depending on ocean conditions and where the plankton forms.