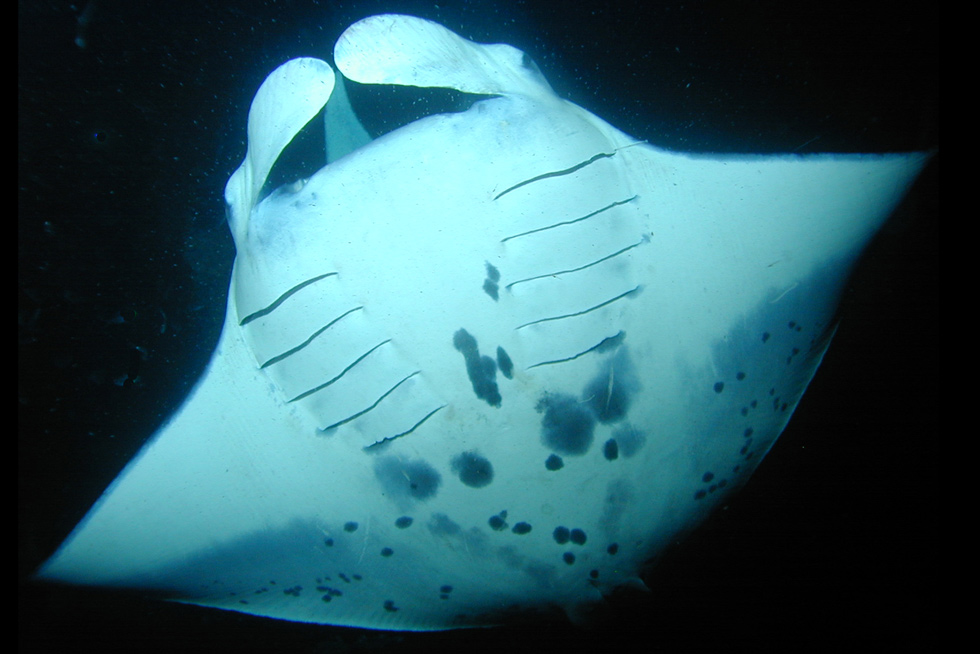 Manta rays are a threatened species, but there is a lot more to it. There are different species of mantas to distinguish between. Additionally, there’s a difference between a “threatened” species and an “endangered” species.

In the following article, we’ll talk about the threats we can protect the manta rays from, exploring policies on a local level (here in Hawaii), national level (in the United States) and global level – and we’ll talk about steps that have been taken towards putting guidelines and legislation in place that will protect them from harm.

There are two species:

Pelagic manta rays live in the pelagic zone of the ocean – neither close to the bottom nor near the shore. Although they may swim inshore at times.

As the name suggests it, reef manta rays stay close to the reef.

For instance, the mantas we encounter often on the West Coast of Hawaii are the reef manta rays. These fish can grow up to 14 feet wide (5 m) (like Big Bertha). While pelagic manta rays grow over 22 feet (7m).

Most policies protect both species, one specific policy does not. We’ll dive deeper into that matter below.

Females reach sexual maturity at 10-15 years. The gestation period is 13 months and only 1 or 2 pups are born every 2-4 years.

How Many Manta Rays Are There (Worldwide)?

Information on the global distribution of giant manta rays population sizes is lacking due to their vast migratory patterns; for local populations of reef manta rays it’s estimated between 300-1500 but even this data is only available through well maintained data bases.

Along the Kona Coast, the non-profit “Manta Pacific Research Foundation” is the organization doing the counting. However, their catalog was established in the 90’s and many of the mantas listed on it have not been seen for a long time.

We kept collecting statistics and maintaining databases in the hopes of obtaining more information about their numbers and migratory behavior, and we could tell that during the years 2009 to 2014, approx. 30 individuals mantas were seen on a regular basis/more than 50x a year. That’s not that many!

Above all, humans create the biggest threats for our gentle giants.

A combination of ocean pollution, fishing nets/hooks, by-catch and the purposeful killing of manta rays have created the “perfect storm“.

There is an increasing demand for manta rays and their gill rakers. Mainly from branches of Chinese medicine which is putting enormous pressure on mantas.

The so-called medical benefits are not supported by science nor by traditional Chinese medicine texts. However, the demand from the global market has driven fisheries around the world to target manta rays. The rate they are being harvested greatly exceeds their reproduction ability.

It’s a heart-breaking situation – and that’s why it’s of utmost importance to prevent this animal from going extinct. I’ve written about the issues with manta rays around Kona (Hawaii) before – you can find the article here (it will open in a new tab, so you can keep reading here!).

Here are the current policies that are in place locally, nationally, and globally.

Legislation Protecting Manta Rays in the State of Hawaii

The worldwide demand for mantas dramatically increased in the early 2000s. Local non-profits worried that foreign fleets would make their way to Hawaiian waters. The group needed more than one run at it with legislation, but in 2009 Act 92 passed into law.

The Hawaii statute establishes criminal penalties and administrative fines for knowingly killing or capturing manta rays within State waters. However, exceptions are made for research and educational purposes.

It protects both species of manta rays.

The legislation is a great start to protect the mantas locally, but many manta ray advocates wished for stricter wording. Unfortunately, there are no fines when it comes to collision, harassment and entanglement.

This is important as, since 2012, manta ray tourism along the West Coast of the Big Island has grown exponentially. Many times, the Kona mantas have been spotted with cruel cuts or bruises from fishing/anchor lines and propeller strikes. This is completely irresponsible and unnecessary.

Because of the unregulated growth of the manta tourism business, more people come to swim with manta rays each year.

Concerned manta ray advocates from within the ecotourism industry were able to get local politicians involved. In 2014, the Hawaii House of Representatives adopted resolution HCR170. This resolution urges the Department of Land and Natural Resources (DLNR) to adopt rules to manage the manta ray sites.

As of this writing (2020), draft rules are still pending and awaiting to pass 11 separate steps of approval. This would take 11 months in a perfect world, but in reality, it might not happen until late 2021.

It’s one frustrating and long-drawn process of already six years and leaves the most vulnerable continuously unprotected.

Since 1973, the Endangered Species Act (ESA) recognizes the need to keep many native plants and animals safe, including guarding them from becoming extinct.

Effective February 2018 the giant manta ray (Mobula birostris) appears on the list of threatened species. However, the reef mantas (Mobula alfredi) were not.

The International Union for Conservation of Nature Red List of Threatened Species provides a uniform platform for evaluating the “risk of extinction”, including all plant, animal, and invertebrate species.

IUCN has 1,300 member organizations (both government and civil society). And above all the input of 15,000+ experts. IUCN is the global authority on the status of the natural world and the measures that need to safeguard it.

As of December 2020, Mobula birostris is classified under “Threatened Ecosystems” as “endangered” and Mobula alfredi is classified as “vulnerable with decreasing numbers”.

CITES: Convention to Avoid Exploitation and Ensure Survival of Manta Rays (and other species)

Every 3 years the CITES meets to add or delete species from the Appendices.

The convention is the international agreement between governments, established to ensure that international trade in specimens of wild animals and plants does not threaten their survival in the wild.

Species included in Appendix II are not necessarily threatened with extinction, but trade in them is controlled to avoid exploitation and ensure their survival.

As of June 2013, eight species of sharks and both manta ray species are included in CITES Appendix II.

Learn More about Manta Rays – and Help Us Protect Them!

Download the free Manta Ray Ebook below to learn everything you always wanted to know about the gentle giants of the sea. Join the community of manta ray advocates today!