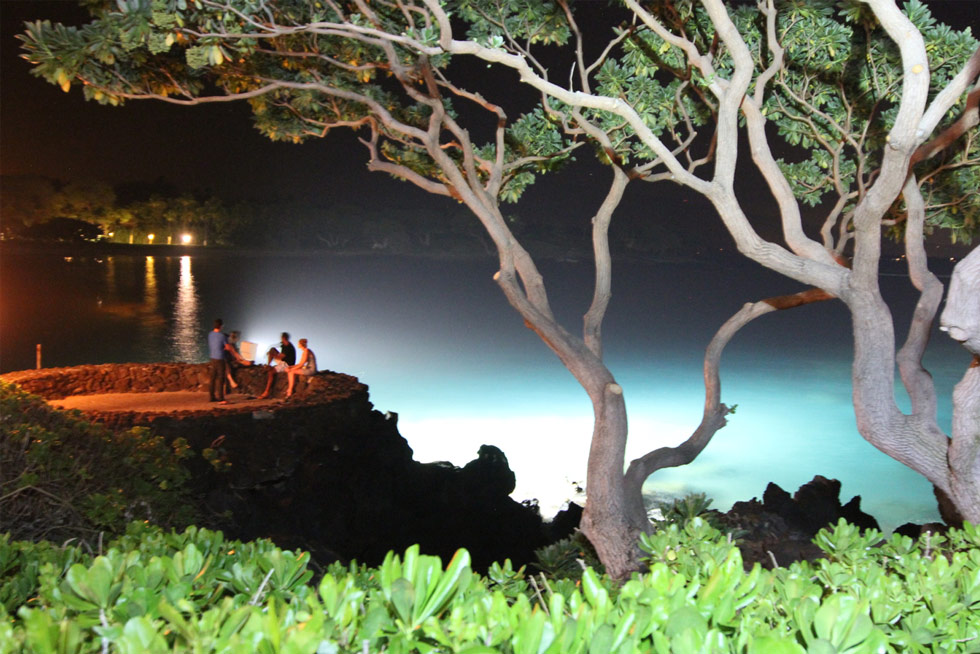 Manta rays are truly remarkable and beautiful creatures, and Hawaii is one of the few places in the world where you can be an arm’s length away from manta rays. Travelers from around the globe visit Kona on the Big Island to swim and dive with manta rays. Did you know swimming this activity has been named one of the top-10 aquatic attractions in the world?

What are Manta Ray Viewing Sites?

Along the West Coast of the Big Island of Hawaii, we’ve got three established viewing sites for manta rays. At these locations, you have a 70+ % chance to see at least one manta ray during the manta ray dive and snorkel adventure. Although the sites are within 100 yards from shore, due to the rocky volcanic coastline they are only accessible by boat, which makes it safe for divers and snorkelers to come and experience the magic of manta rays first-hand.

To keep manta ray ecotourism on the island safe and sustainable, commercial activity providers have agreed on tour operator standards.

How did the first manta ray viewing site start?

In the early ’70s, when the former Kona Surf Hotel opened, the resort illuminated the surf zone with bright floodlights. This way, guests could enjoy the beauty of the wave action at night from the rooms and public viewing decks.

Unintentionally, this attracted plankton to concentrate in the water near the shoreline. Since a manta ray’s diet consists of plankton, it was an incredibly rich food source for the mantas.

Over time, the manta rays began to associate light with their natural food source; this process is called “classical conditioning” or “Pavlov effect”. This is how the shoreline of the Kona Surf Hotel became a favorable feeding location.

In 1991, a man called Jim Robinson realized that the manta rays’ frequent visits to the resort could be turned into a touristic activity. His company Kona Coast Divers (KCD) became the first boat operator to schedule weekly scuba night dives.

They also had custom-built underwater lights they’d place on the bottom of the sea; this drew the manta rays away from the shallows into deeper water (approx. 30 feet/10 meters), where it would be easier to position groups of divers.

The attraction was an instant success with tourists, and other dive operators then followed suit. Marine life interaction guidelines were established to ensure that the manta rays were not harmed.

Back then, manta ray advocate James Wing had the video concession at KCD – this meant he’d join the groups into the ocean, and create beautiful footage of the manta ray dives for the guests to take home as souvenirs.

In its early stages, the manta ray night dive was scheduled once a week, yet it was only a matter of time before boat operators would be doing this every night. Over the years, more manta rays were conditioned to feed at the Kona Surf Hotel at night ~ until the summer of 1999.

For several months only one or two manta rays were sighted and then for a few weeks none showed up. This might have been due to the cyclical nature of plankton. Nevertheless, it prompted James to find other viewing areas (more about this later).

What are the Manta Viewing Sites Along the Kona Coast?

The zone in front of the Kona Surf Hotel, in Keauhou on the west coast of the Big Island, was the first manta ray viewing site. The official name is Kaukalaelae Point, but most people know it as “Manta Village”.

In May 2000, the Kona Surf Hotel was closed and the lights were turned off. As the plankton stopped accumulating, the manta rays stopped frequenting the area.

In October 2004, the resort reopened as the Sheraton Kona Resort & Spa at Keauhou Bay. James teamed up with the resort re-creating a favorable manta ray venue. A short time later, manta rays returned and many new mantas have been identified and named since.

The dive site “Manta Heaven” is located in Makako Bay that is just around the corner of Keahole Point, the most western tip of the Big Island. It’s offshore of the Kona International Airport. During daylight hours, the dive site is called “Garden Eel Cove”.

In the summer of 1999, the manta rays essentially abandoned the Kona Surf Hotel as a feeding area. There were no sightings for many weeks. James knew that he could find the manta rays somewhere along the coastline and had heard from local boat captains that manta rays were being seen during the day at Garden Eel Cove. His friends Mike Ho and Mike & Nicki Milligan had done night dives in the bay and a manta swam by.

At the time, our production company worked with Eco-Adventures. James took their small boat for reconnaissance dives and his plan was to dive as many dive sites along the Kona Coast for 20-30 minutes as many nights as necessary until the manta rays would be found. His first choice was: Garden Eel Cove.

On a calm night in August 1999, James placed dive lights in the natural sand chute in about 30 feet/10 meters of depth. Immediately 6 manta rays showed up and enjoyed the meal that was gathering at the lights. They were the same manta rays we had seen for many years at Manta Village including Lefty and Big Bertha.

Manta Heaven was created and named by scuba instructor Ranya Henson. James and Eco-Adventures were the first to regularly schedule manta ray night dives there. Soon after, other boat operators followed them to the newly established site. James also created the stone circle, known as the “campfire”, that has been used as a point of reference to settle the divers in the sand chute in the least disruptive way. It is still used to this day.

Thanks to James we established Manta Heaven in 1999. We were fortunate to have the alternative site while the Kona Surf Hotel closed down in May 2000 and the floodlights were extinguished.

The legendary Mauna Kea Beach Hotel is located in Kauna’oa Bay on the Kohala Coast and was one of the first hotels on the island. It was built by Lawrence Rockefeller and celebrated its 50th anniversary in 2015. It has an incredible white sandy beach which is rare on the Big Island as it is the youngest, geologically speaking.

Just like Manta Village, the hotel has had one bright light illuminating the shallow waters of the bay for decades, but because it is on private grounds, it’s not accessible to the public. In addition, motorized vessels are prohibited to enter Kauna’oa Bay.

Today our team offers free public manta talks at sunset (Mondays and Wednesdays) at Manta Point which is the shoreline viewing area overlooking the bay. Due to changing sunset times throughout the year, we recommend checking with the Mauna Kea Beach Hotel directly for accurate start times.

Since the summer of 2015, we also conduct our moonlight swim activities right there. With manta sightings being very consistent (over 80%), Kauna’oa Bay is a wonderful opportunity to experiencing the gentle giants up-close and personal.

So, are you ready to join the Experience of a Lifetime?

If you’re thinking about booking a manta ray activity, don’t miss our guide for swimming with manta rays in Hawaii. It’ll answer all your questions about equipment, prerequisites, safety, sustainability, and much more.

It’s a great FREE resource for anyone who’s getting ready to experience the manta rays firsthand.