The Anatomy of Manta Rays 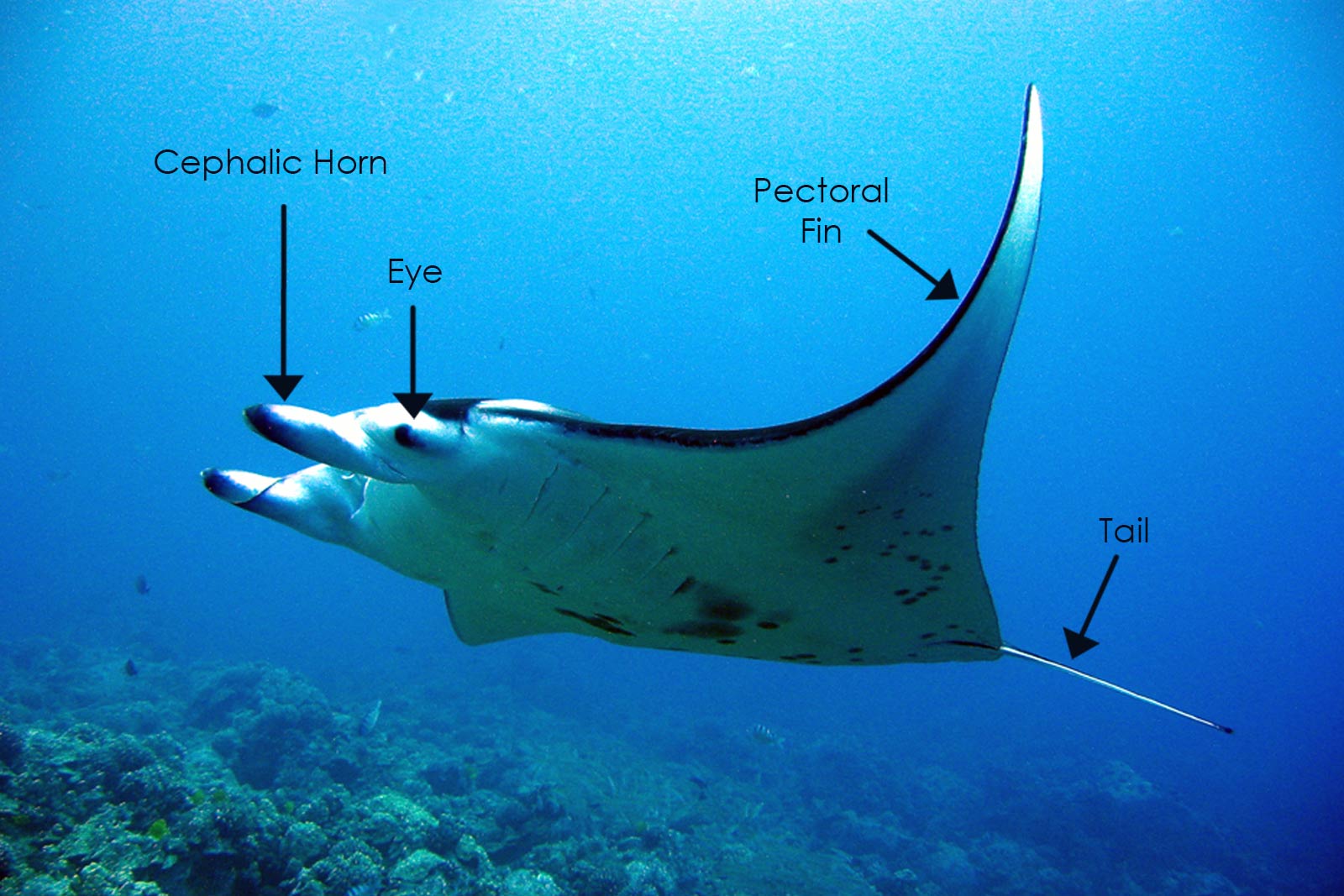 The word “manta” means “blanket” or “cloak” in Spanish, and it’s quite accurately descriptive for these large, flat, diamond-shaped cold-blooded fish with eyes on the sides of their heads.

In this article, we’ll dive into the body parts of manta rays, you’ll discover more about rays with and without stingers, teeth and everything else you always wanted to know about the anatomy of a manta ray.

We’ve got a video for you to watch about manta ray anatomy, or scroll down to read the details!

They’re all part of a subclass called “elasmobranchs” and have skeletons made of cartilage instead of bone. That’s why they’re called “cartilaginous fish.”

Among fish, mantas have the largest brain-to-body ratio. Their brain size is estimated to be as big as an adult fist, and they are fairly more advanced at problem-solving and communicating than your average fish.

There are two types of manta rays: the migratory giant manta ray (also called oceanic or pelagic manta) and the reef manta ray, which lives in shallow coastal areas.

How Big is a Manta Ray?

Manta rays are clearly recognized by their enormous size.

Giant oceanic mantas can measure up to 22 feet (7 meters) from wingtip to wingtip and weigh up to 3,000 pounds (1,400 kilos). That makes them the largest of the more than 500 species of rays and skates.

Reef mantas measure a bit smaller, growing about 14 feet across (about 5 meters).

The Anatomy of a Manta Ray: Body Parts 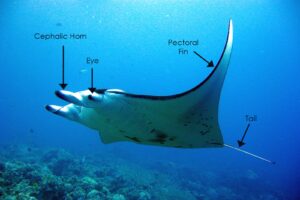 Viewing from the topside of a manta ray, you’ll find pectoral fins, cephalic horns, eyes, and a tail.

Even though manta rays have tails, they can actually exist without one. We go out to swim with manta rays (almost) every day, and so far we’ve identified two tailless mantas that didn’t appear to have any problems without it.

The manta’s mouth is in the front part of their body, and we’ll get into more detail regarding their mouths in the next section.

From the ocean’s surface, if you see a dorsal fin sticking out and think it’s a shark, it could very well be a manta ray as they often swim in shallow water. They use the dorsal fin to maneuver their bodies, as they’re incredibly acrobatic in their movements.

Unlike their relatives the stingrays, manta rays don’t have a stinger, barb or teeth. Click here for a full comparison between stingrays and manta rays!

What mantas do have is a rather small “tooth band” — hardly a reason to fear them, as manta rays are known to be “gentle giants.”

For protection against predators, mantas depend on their huge size and fast agile swimming rather than their tooth band inside their mouth.

If threatened, they simply swim away fast.

Incidentally, the manta rays have very few natural predators, but the two they do have are some of the ocean’s most dangerous: large sharks and killer whales. In Hawaiian waters, it would be a tiger shark.

The Mouth of Manta Rays

The mouth of the manta ray looks like a big cavernous cave, which can be intimidating: It’s large and you might think it could swallow you up!

Mantas cannot eat you, however, as they don’t have the ability to swallow anything other than plankton. They don’t even eat fish!

If a fish inadvertently enters a manta’s mouth, the manta will quickly spit it out.

The manta ray’s mouth is made up of gill rakers and gill arches, with the latter working to keep the cavity open for feeding — manta rays close their mouths when they are not feeding.

How do Manta Rays Feed?

When plankton-rich water enters the mantas’ mouth, the gill rakers “rake” the plankton from the water and push it back towards the esophagus. The water then runs over the gills for oxygenation and exits through the gill slits on the ventral side.

Importantly, mantas have no suction to their mouths. They simply swim through the food that is in abundance in front of them and filter-feed.

Read (and watch) more about how manta rays twirl and turn so they can feed efficiently in this article. 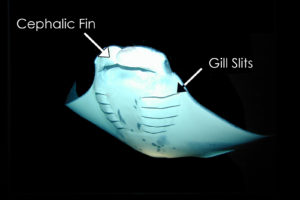 Cephalic means “of, in or relating to the head” and these fins come in two distinct positions:

The cephalic horns gave the mantas the unfortunate nickname “devil ray.” Think of the ancient mariners who were on their ships offshore and encountered a pelagic manta ray with the cephalic horns.

The sailors thought something devilish was around the ships as the horns resembled the devil and although we know much better today, this awful nickname stuck with the gentle giants.

We think of them as the complete opposite; angel-like creatures exuding grace and beauty and touching peoples’ hearts.

To see video footage of the majestic manta rays and the rolling up of their cephalic horns, have a look here.

When you come along to swim with manta rays here in Hawaii, the mantas that you see are reef mantas.

On their undersides, they are predominantly white with darker spots. For identification purposes, we concentrate on the area between their gills slits. This unique spotted pattern is like our fingerprints, which can be compared to other individual mantas.

At this point in the local database, there are over 300 different manta rays identified. We’ve given many of them fun names like: “Ray Charles Ray,” “Sugar Ray,” “Tanque Ray,” or “Darth Ray-der.”

Read more about the process of identifying and naming manta rays in this article – or see the whole list of all manta rays that have been identified (and named) in this area in the Manta Ray Library!

Oceanic mantas don’t have the spotted undersides, but rather their bellies are either black or white.

The “Chevron” — the black and white variety — has a mostly black back and a predominantly white underbelly.

The other variety, called the “Black Ray,” is entirely black on both sides. If you’d like to explore the giant oceanic manta rays further, have a look here.

Want more facts about manta rays? Check out this article that has a lot more information about the gentle giants.

Or download the free ebook here, and become a manta ray advocate today!

Learn all about these majestic ocean creatures so you can tell your friends about them… and raise awareness about marine conservation.