Where to See Manta Rays in Aquariums 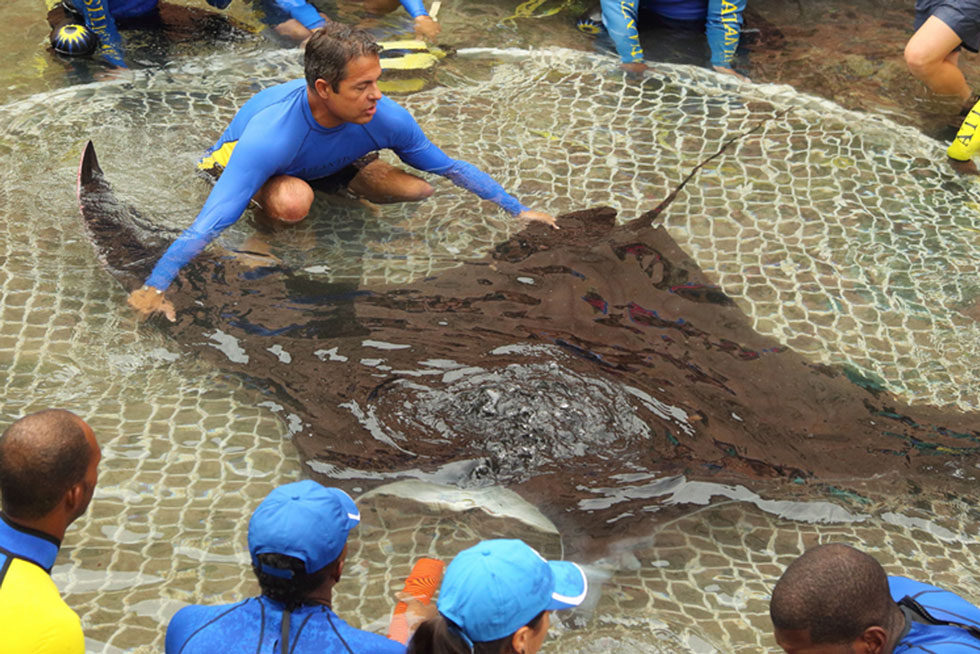 “Have you ever seen a manta ray before?” is one of the first questions we like to ask guests who join us on a moonlight swim with manta rays.

Most often the answer is YES, people believe they saw a manta in aquariums worldwide: “at Sea World”, “in the Maui Aquarium”, “at Monterey Bay” or “on TV 🙂 ”.

With many rays in the ocean like the spotted eagle ray, bat ray, mobula ray, devil ray, or butterfly ray, most guests are surprised to learn that they have not actually seen a manta ray in person; they’re confounding mantas with other types of rays.

Smaller species of rays (like the cownose ray or stingray too) are commonplace in aquariums worldwide, but manta rays are very rarely found in captivity.

So this topic ties into an interesting question from Andre, a long-time manta enthusiast from Brazil:

What do you think about this manta ray in the Atlantis aquarium?

We had met in Hawaii a few years back and he was curious about my thoughts about captive programs (i.e. aquariums) of manta rays.

Researching the answer led me down a journey of discovering several resources that I am sharing with you today for your reference. Later we will also circle back to Andre and his inquiry.

We know of four places around the globe that have mantas in huge aquariums:

These aquariums are GIGANTIC (several million gallons) and not too long ago, I had a chance to go backstage in Georgia to see how the mantas are being fed.

Mantas can never stop swimming and have to always keep moving forward: they’re filter feeders who eat as they swim. The task of feeding plankton to a filter feeder is very challenging. The feeding process feels unnatural but it seems to work in Georgia, as they have the same mantas for several years.

Maintaining huge tanks is logistically difficult and that’s why only a few places worldwide are adequate to keep mantas captive.

This is good news because only a few of the gentle giants are actually stuck inside and swim in circles all day. In comparison, a lot more of the smaller rays (stingrays, cownose rays, bat rays) are being held in countless aquariums.

No studies have been done to determine if manta rays in aquariums are in good health or suffer any ill effects due to the confinement.

I was delighted to find out that the Atlantis Resort has successfully released several mantas back into the wild. The latest transfer of “Leyley” in a helicopter took 105 seconds, from lift-off to the ocean; it is quite a spectacular sight!

According to some researchers there is a fundamental incompatibility between what cetaceans (marine mammals) need to thrive and what they are afforded in tanks.

For example, bottlenose dolphins breed readily in captivity and do ok in (good) captive environments. On the other hand, belugas whales don’t breed well in captivity. After the release of the documentary “Black Fish” a very big spotlight was pointed at killer whales in aquariums and the detrimental effects of captivity.

In fact, twenty-two years ago, I volunteered with a research project that was “exploring dolphin’s intelligence“. I was saddened to see very small tanks for the four resident dolphins that were being held for over 15 years.

I often wonder about the need for ongoing research of dolphins in captivity and ask myself:

… But Manta Rays are Fish, not Mammals

Do the same concerns apply?

While I don’t believe whales and dolphins belong in captivity, I do think that for educational purposes and for conservation at large, aquariums are a necessity to educate people that don’t have access to the ocean.

It’s one thing to watch videos about manta rays, or to read facts about manta rays, but actually seeing manta rays in person does increase your awareness for the species tremendously. Statistically, very few people ever experience mantas in the wild.

But once you do, I can assure you that it elevates your awareness and opens your heart to protect and advocate for them!