How to Avoid Nasty Encounters with Jellyfish in Hawaii 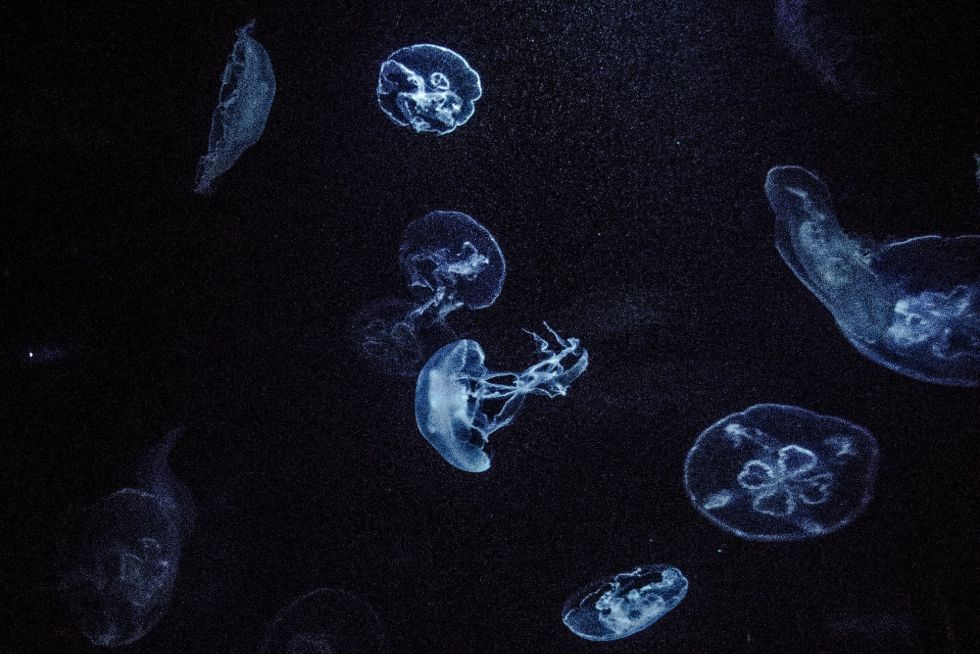 In Hawaii, about 8-10 days after a full moon, there is a higher probability of box jellyfish sightings on all leeward sides of Hawaii islands for three consecutive days.

Now Hawaiian beaches and underwater adventures are great fun, but no one wants to be stung by a jellyfish. While none of the jellies you find in Hawaii are deadly, their sting burns badly, irritates the skin, and can ruin a vacation.

By knowing when the jellyfish are floating near the shore, you can better decide when to go swimming — or be better prepared when you encounter one.

“Jellyfish” (also known as “Sea Jelly”) is the common name for how Medusozoa look in their so-called “medusa stage,” which is their sexual (larvae-producing) life stage.

Technically, the correct term for jellyfish is “jellies,” as they are not actually fish.

Jellyfish have an umbrella-shaped body, and their tentacles can sting to protect themselves from predators.

Like humans, jellyfish are made up mostly of water. But jellies are composed of nearly 95% water. Humans consist of “just” 60% water.

Jellyfish have been around about three times as long as the first dinosaurs. Their oldest ancestors date back 500 million years; they might have lived up to 700 million years ago.

The jellyfish themselves, however, don’t have a long lifespan; most jellyfish only live about a couple of months.

They live everywhere from the Mediterranean to the Antarctic, at every depth of the ocean. They tolerate both shallow warm water and deep, dark, cold water.

Jellies eat other jellies, and hence, the biggest predator of jellies is its own kind. They usually leave their own specific species alone and eat other species of jellyfish.

For more fun facts about jellies, have a look here.

How Do Sea Jellies Sting?

Some box jellyfish are known for their powerful venom that stuns or instantly kills prey, such as fish or shrimp. Stings from certain species can be harmful and extremely painful to humans, and sometimes even fatal.

Most other species of jellyfish don’t pose a serious threat to humans.

Box jellyfish that are seen in Hawaii are not deadly.

The tentacles of a jellyfish are covered with hundreds of thousands of specialized cells; each cell harbors a capsule called a “nematocyst” or needle-like stinger.

When activated, this stinger shoots venom into prey or a predator (or a human) at the speed of 37 miles per hour (60 kilometers per hour). This is microscopic harpoon speed.

To a human, this sting feels like being poked with a bunch of needles. If hit close to the spine, some might feel like their limbs refuse to function properly or experience difficulty breathing.

What Happens When You Get Stung

While fatalities from jellyfish are extremely rare, being stung by one can still ruin your vacation!

Also, most folks do not know an effective remedy and by applying a relief found on the internet, you could potentially intensify and lengthen the burning sensation.

In the great majority of cases, reactions run the scope from not feeling anything to feeling extremely ill for several days and everything in between.

Symptoms often depend on a person’s age, health, size, time exposed to the stinger, as well as the size and type of jellyfish. If symptoms persist or exacerbate quickly, seek immediate medical treatment.

In extremely rare cases, a sting can lead to high blood pressure, brain hemorrhage, and even death.

Most casualties from venomous box jellyfish stings happen within a matter of minutes from cardiac arrest. This type of box jellyfish would typically be found in Australia, not Hawaii.

While we still don’t completely understand the mechanism that leads to death, this article on sciencemag.org shines a light on the science and the research behind it (Angel A. Yanagihara, Ph.D. from the University of Hawaii is awesome!!).

What To Do When You Get Stung by a Jelly

There’s no actual proven remedy, and there are hundreds, if not thousands, of timeworn homemade treatments.

When you get stung by a jellyfish, first remove the tentacles or nematocysts from the skin, without plucking or scraping. Use a towel or some cloth other than your fingers.

As to what to do next…

Many people swear by urinating on irritated skin (Please don’t!), while others insist on applying seawater (I don’t think so!) and baking soda, aloe vera juice, or hot water (NOT cold water or ice).

A recent study carried out by researchers at the University of Hawaii concluded that not only are some of these common recommendations not that effective, they might actually make the situation worse!

Their research suggests rinsing with vinegar after the sting to stop the jelly’s stinging cells from activating, then applying heat to slow down venom activity.

In our experience, HOT WATER definitely works (as much as you can stand it). For example, jumping into a hot tub brings fast relief, while cold water makes the nematocyst fire again.

How Often Do People Get Stung by Jellyfish in Hawaii?

According to the Washington Post, studies and media reports estimate that the number of people who get stung hovers around 150 million stings per year worldwide.

Fortunately, in Hawaii, the venom of the box jellyfish is less potent than their relatives elsewhere. Nonetheless, the sting is still painful.

Additionally, most folks do not know an effective remedy and by doing the “wrong thing” that they read on the internet, they could potentially intensify and lengthen the burning sensation.

Varieties of Jellyfish Around Hawaii

Throughout the world, there are about 2,000 different documented varieties of jellyfish. Some scientists believe that there could be an additional 300,000 more jellies that have yet to be identified.

Ocean-goers around Hawaii encounter mostly “box jellies”, which are pretty predictable (see the calendar below); however, you will randomly encounter Man O’ Wars year-round around the shore. Most people get stung by these Man O’ War; they’re not technically jellyfish, but their sting is painful as well.

Why an Influx of Box Jellyfish?

Box Jelly influxes happen about 8 to 10 days after a full moon. This is when the box jellyfishes’ mating habits are linked to tidal and lunar conditions.

When any kind of jellyfish is sighted, lifeguards put up signs to warn people of their presence in the affected areas, but nevertheless, some people are eager to swim.

When high tides recede as dawn approaches, the box jellies appear inshore and often end up trapped along the beach. Or, strong onshore winds push jellies towards the beaches and that’s when they really pose the biggest threat to swimmers.

Check out the box jellyfish calendar and see when the jellies are expected (approximately) along the leeward sides of all Hawaiian Islands during the day- or nighttime.

How to Avoid Nasty Encounters with Jellyfish

There are four ways to avoid swimming into a group of jellyfish when you’re around Kona:

At Manta Ray Advocates, we have lots of in-water experience and do our best to guide you without getting stung.

Click here to arrange a manta ray swim — we’ll be sure it isn’t when the jellies are floating about.

To fully prepare for swimming, snorkeling, and/or scuba diving with manta rays around Hawaii, download our ebook about how to prepare to swim with manta rays on this page!