On January 11th, 2013, a local dive team was swimming with manta rays off the Kona coastline. Divers and snorkelers bring powerful lights and cameras to observe the mantas as they feed on plankton after dark.

On this night, a wild bottlenose dolphin approached the divers. He came swimming closer and closer, finally moving among them without fear. The reason for this unusual dolphin behavior became apparent when the injured dolphin turned toward one diver. A hook and fishing line was stuck between his mouth and left pectoral fin. This severely and dangerously restricted his ability to feed and swim freely.

The dolphin paused near a divemaster, who started removing the hook and line – to save his life. The whole search for help + the rescue lasted “only” 4 minutes… This is a long time for a dolphin, as they depend on air.

Even though this must have felt like an eternity for the highly stressed animal, he patiently waited for the diver to be done. Now and then, he’d insist: when the diver turned to grab the tool to cut the line, the 9-foot-long dolphin would swim around and face him again.

After the dolphin was freed, he went straight to the surface to take a breath. To everyone’s surprise and delight, he then came back to the group. We continued to try and remove more lines, but at this point, he had regained full motion of the pectoral fin… And decided to swim off into the dark night.

Even seasoned researchers commented about this highly unusual dolphin behaviour. The dolphin actually asking for help, his patience during the rescue, and him coming back after taking a breath – all of these show the intelligence and trust that he put in our little group.

We nicknamed the dolphin “Notch”, mainly because of a gap/notch on its peduncle (the muscular tail section between the dorsal fin and the flukes).

We always wondered if Notch was doing okay. My former assistant Ryan Leinbach captured breathtaking footage of him in courtship behaviour a year later. Finally, that was proof that he was not only fine but even engaged in making little dolphins. Let’s call this a double happy ending. 🙂

Watch the Video for this Amazing Dolphin Rescue

I was able to catch the entire dolphin rescue action on video. It spans the timeframe from the moment it swam towards the group – to when he left. The breathtaking footage became a viral sensation. Available on YouTube and Facebook, the video has over 100 million views (and counting).

The video above also includes sightings of Notch before the day it all took place, the goosebumps-generating rescue, and the reunion one year later.

The “film festival edition” was shown at the Waimea Ocean Film Festival (2015+2016) and the HERO International Film Festival in 2016. At the latter, the film was a “Sylvia Earle Ocean Conservation Award” finalist.

Better even – the rescue was featured on BBC, National Geographic, Good Morning America, ABC with Diane Sawyer, CNN, CBC and Reuters, to name just a few. 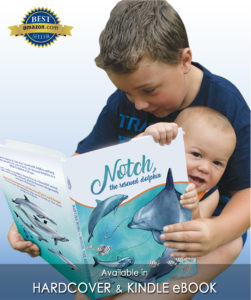 The thousands of emails and positive feedback from all around the world (I was even on BBC breakfast TV!) inspired me to turn the story into an educational children’s book.

The book follows Notch’s journey from playing with his family, through the entanglement with a fishing line, his search for help, and finally his rescue by scuba divers.

It features several other characters that live along the coast of Hawaii (in real life!). There’s the manta ray Big Bertha, Hawaiian monk seal Waimanu, humpback whale Wanita, tiger shark Laverne, and many others.

We collected the funds for Notch’s book through a Kickstarter campaign, and Jackie Mask created beautiful illustrations for the children’s book.

The one-of-a-kind story teaches children about trust, love, and hope. It includes important messages about conservation, environmental protection and empowerment.

Why This Story Matters

Notch’s story resonates – after all, he isn’t just another fictional cartoon character. He is a real, wild, bottlenose dolphin living off the coast of beautiful Kona, Hawaii. And like all of the ocean’s residents, Notch is affected daily by humans’ actions in his environment.

The book is for children of any age. The little ones will appreciate the beautiful drawings and learn the names of marine animals living in the Pacific, while older children can read the story on their own and appreciate the lessons of conservation, environmental protection and empowerment.

The book is available as a hardcover or ebook – click here to check it out!