Do Mantas Feel Pain – and How do they Heal when they get Injured? [Video]

Manta rays are calm and pacific animals with very few predators – but they can get injured. Most of the time, humans are the cause of their injuries – but they can also get wounded by natural causes.

In this article, we’ll dive into whether mantas can feel pain – and also into the question of how they heal after an injury.

We were able to track two mantas that recovered from deep wounds caused by fishing line/hooks and it was interesting to learn how the healing process worked for them.

How Melainah Ray Recovered from a Fishing Line Injury

Between 2011 to 2013 we saw Melainah Ray, a manta female of ~10 feet wingspan, on a very regular basis when we took guests to swim with the mantas.

She came to feed at both dive sites at least 200 times per year and often traveled the distance of 16-20 miles from the airport location to our manta viewing site at Keauhou (and vice-versa) within 24-48 hours. It was cool to see her movements along the coastline as there is not much known about that.

On February 25th of 2011, Melainah showed up with a deep cut on her right wing.

The poor manta was clearly experiencing pain. She looked like she was “limping”: she was trying to feed around the lights, but her movements were slow and careful. It appeared as if she did not want to use her wing too much; an impossible task for a winged creature who has to keep swimming constantly to stay alive.

We wanted to help her, but of course, that was another impossible task. Not only are mantas wild and free animals who wouldn’t just accept help from humans; also, wounds like this need to heal themselves. 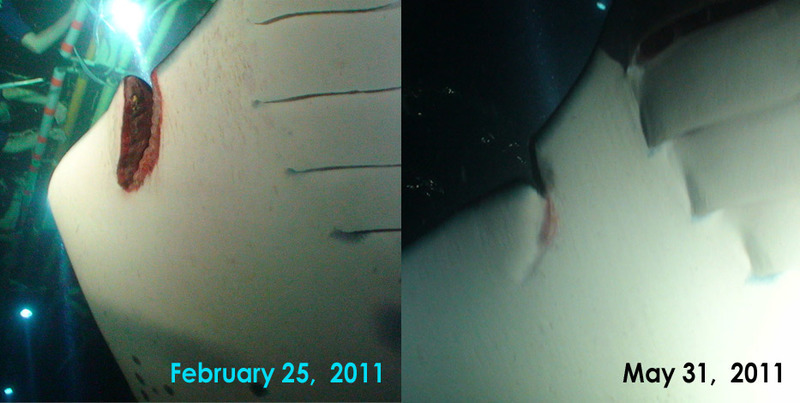 In the following months, Melainah Ray continued to come and feed at the manta ray viewpoints. We were able to record videos and take pictures of her healing process. I compiled it into one video that you can watch here.

The picture above shows the cut when we first saw it in February, and a little over three months later in May.

It’s quite astonishing to see how it got better over time and I am glad that we can report a happy ending.

Thevideo also reveals the story of Hans Ray and how he recovered from a nasty hook that almost cut off his cephalic fin…another fantastic happy ending.