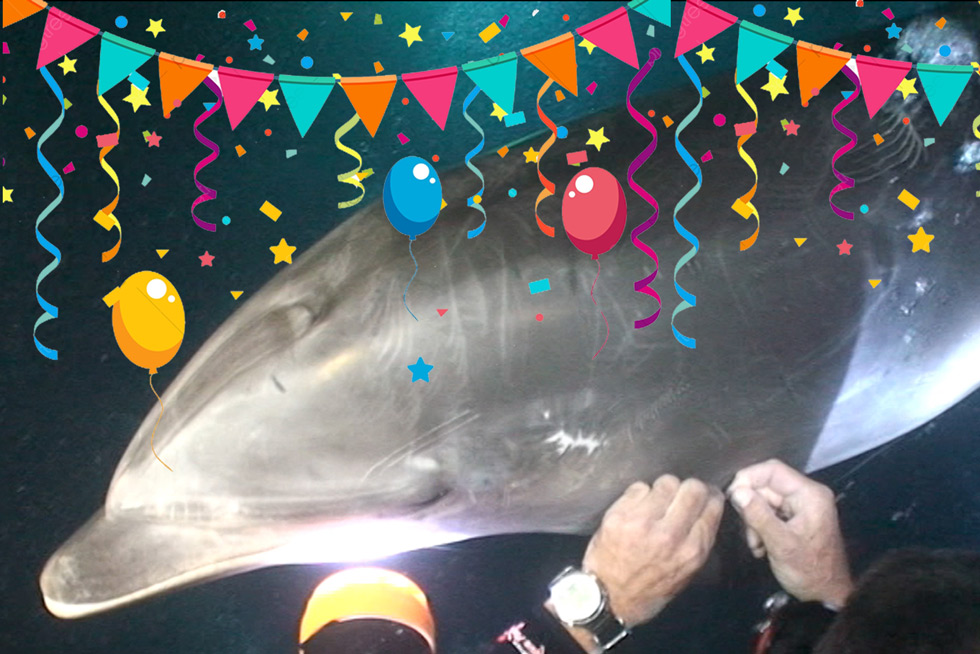 Today marks the 7-year anniversary of the dolphin rescued by a scuba diver, and there is perhaps no better way to celebrate this special day than by sharing another inspirational story of recovery connected to the rescued dolphin named Notch.

Remarkably, this same rescued dolphin helped carry a family through one of the toughest days of their life.

Recap of the Dolphin Rescued by Scuba Diver

On January 11, 2013, Notch, a wild bottlenose dolphin asked divers for help because a hook had lodged in his pectoral fin wrapping his head in fishing line.

The line severely and dangerously restricted his ability to swim freely so he approached our local dive group and thanks to a compassionate and very skilled divemaster, Notch was freed and saved.

I caught these breathtaking moments on camera, and they were truly a highlight in my career as an underwater camerawoman.

Notch’s rescue video quickly went viral across the world. It’s mind-blowing how the world resonates with a wonderful demonstration of trust and hope between two species.

Meet Lynne Stalker and her son David who entered my life just a few days ago when they joined our manta ray activity.

In January 2013, David was suffering from a brain tumor and was scheduled for surgery on the same day when the world-wide press picked up on the rescue video.

In Lynne’s words: “We were sitting in the waiting room all day, and about every 1/2 hour the story of the rescued dolphin came up. It was so special to see something from the Big Island where we had traveled often, and it felt very encouraging, almost like God was saying, everything will be okay…”

Watch this fun celebratory 4-minute video where you will meet Lynne and David plus receive an update on Notch and see how all of them are doing today.

It’s a beautiful day to celebrate and is meant to be an encouragement that acts of compassion and kindness will always go a long way even if you don’t know how it affects someone else thousands of miles away.

Did you know the remarkable story of Notch is captured in a best selling children’s book on Kindle?

You can preview the rescued dolphin book and discover the remarkable short video of Notch’s rescue via the Notch Dolphin Book webpage.