Why you should never ever touch a manta ray 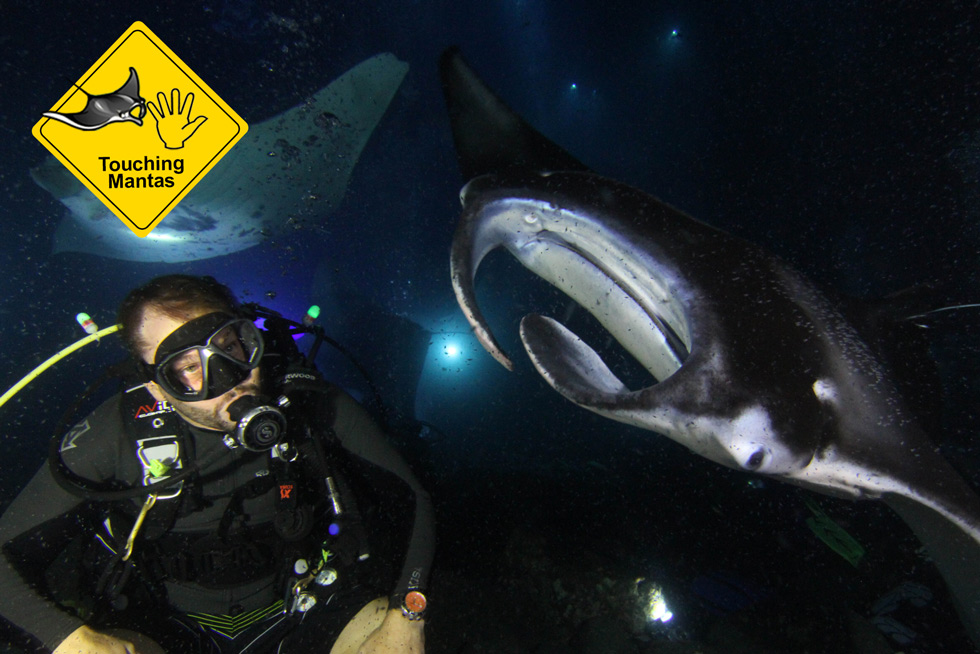 One of the most frequently asked questions we get is “Can we touch the mantas?” and the short answer is NO.

Touching Manta Rays can Startle Them

The first reason to not touch a manta ray is pretty straightforward: these are wild animals, and they’re not used to being touched by humans.

Although mantas are incredibly relaxed and have a magical effect on people who swim with them (we don’t call them “gentle giants of the sea” for nothing!), when they’re startled they could inadvertently swim into corals (damaging them) or other divers and snorkelers (potentially hurting them).

When You Touch a Manta Ray, you Damage their Coating

Have you ever touched a fish? And we don’t mean the ones that are already prepared in Sushi or “fish and chips”- LOL.

Fish feel slimy because of a mucus coating which makes it hard to hold and easily slip through the fingers.

Manta rays are fish, and as such, they have this same slime coating on their bodies. The coating protects them from bacteria and if it gets removed, it can expose the manta to infections.

Touching a manta ray means touching the coating – and in most cases, that results in damage to the coating… and exposing them to all the things that coating usually protects them from.

As a general rule, our belief is that humans should not touch anything that lives in the ocean – dolphins, turtles, coral, etc.

Guidelines for Interacting with Manta Rays

The usual follow-up question is:

Why do Mantas have Red Sores on their Underbelly?

Yes, some manta rays have red sores (or abrasions) on their underbelly, more specifically on their cephalic fins.

There may be two potential reasons for these abrasions:

Check out the following comparison of Curly Ray and Koie Ray. 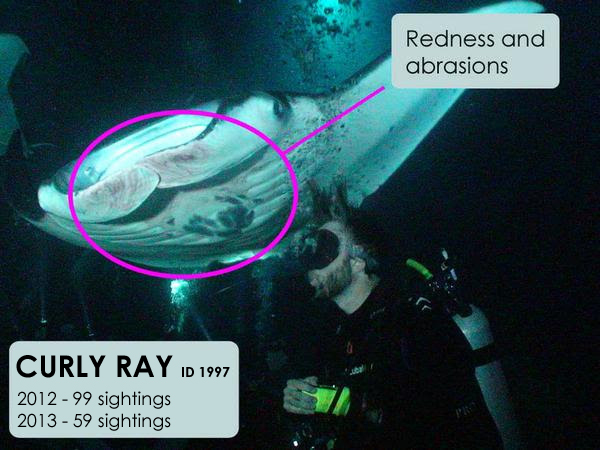 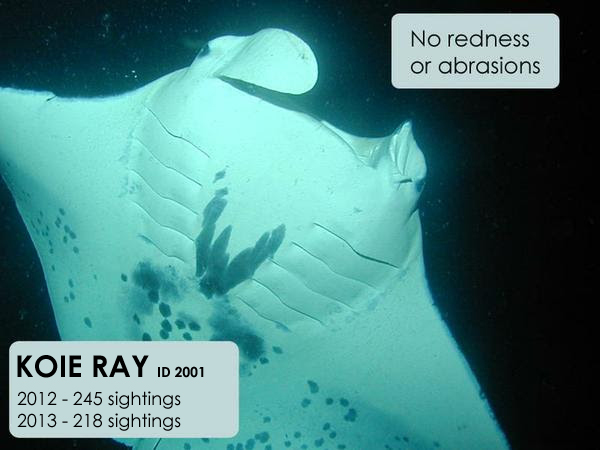 Both mantas were identified over 18 years ago. For as long as we remember, Curly Ray has had redness and sores on his cephalic fins and underside. Koie Ray has always been “clean”.

While Curly comes less often, he has more abrasions than Koie Ray. Why is that? We think that once the slime coating is gone, Curly has not been able to recover from his injuries, so the affected areas stay red.

Do Mantas Feel Pain – and How do they Heal when they get Injured? [Video]

Other Ways in which Manta Rays Get Hurt

We have also seen Manta Rays with black spiny sea urchins sticking out of their body (mouth or cephalic fins), which would indicate that they get too close to the reef and seem to run into “stuff” and contributes naturally to lose the protective coating.

Who would have thought mantas are clumsy? 🙂

The good news is that they survive even with the redness and abrasions but it does not mean humans should touch the mantas.

When we take guests snorkeling with manta rays, many of the Kona mantas come very close to participants.

Our philosophy is to enter their environment as guests showing respect, appreciation and to DO NO HARM!